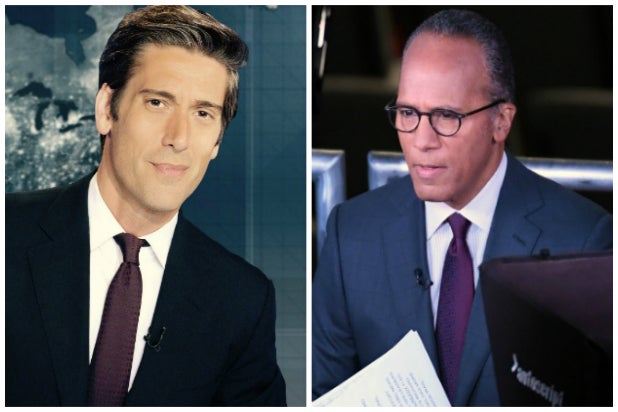 David Muir just toppled Lester Holt on a week that probably should’ve been in the bag for NBC News.

ABC’s “World News Tonight” (9.009 million total viewers, on average) bested NBC’s “Nightly News” (8.447 million) last week for the first time during an Olympics in more than 25 years. The big “W” comes with a sizable asterisk, however: “Nightly” aired at an earlier time on the West Coast to allow live Pyeongchang competition to claim the news’ normal time slot. And Holt won the key 25-54 demographic anyway, with 2.139 million viewers to ABC’s 1.955 million.

Still, Muir’s margin of victory was a strong 562,000 total viewers. The last time the two top newscasts lined up this way during the Olympics was back in Week 2 of the 1992 Summer Games, which was the first full week that August.

Time-shifting aside, the turnaround is pretty impressive. During prior Olympic Games, NBC News generally won by a few million viewers per night. And season-to-date, “World News Tonight” is winning the total eyeball race, though “Nightly” claims the age range most-coveted by advertisers.

As for “CBS Evening News,” well, that program finished a distant third in all the main Nielsen metrics for the week of Feb. 12, 2018. The bronze medal finish is pretty standard for them.