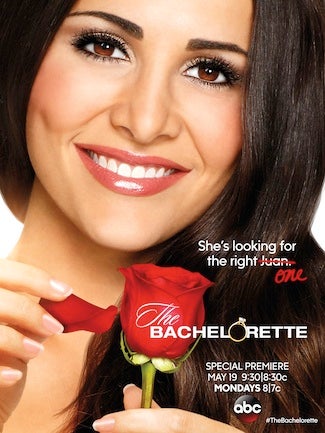 Judging from the first poster for the upcoming season of “The Bachelorette,” ABC is clearly ready to move on from last season’s “Bachelor” star Juan Pablo Galavis.

In the new poster featuring bachelorette Andi Dorfman, ABC crossed out the “Juan” in its tagline and replaced it with “one.”

Dorfman was named next season’s Bachelorette after saying goodbye to Galavis on “The Bachelor.” She was pretty happy to walk away from him after they spent an overnight date together.

ABC’s announcement of Galavis’s selection as “The Bachelor” was done with much fanfare. The Venezuelan was the franchise’s first non-white main man.

But just weeks into the season, the tide began to turn against Galavis after he said that he couldn’t see there being a gay Bachelor, then proceeded to dig himself a deeper grave by explaining why he felt that way. He said, “I don’t think it is a good example for kids to watch that on TV,” and that gay people are “more pervert in a sense.” That earned him a few rounds with GLAAD.

Galavis’s fate was sealed when he angered viewers after ultimately choosing bachelorette Nikki Ferrell, but not proposing.