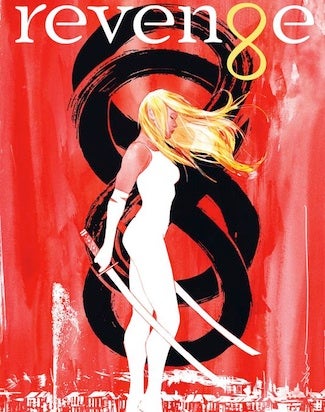 Marvel Comics and ABC Studios, both owned by The Walt Disney Company, are partnering to deliver a hardcover graphic novel which would serve as a prequel to ABC drama “Revenge.”

“Revenge: The Secret Origin of Emily Thorne” will be released on Sept. 3 and takes place when the orphaned girl is 19-years-old. Fresh from training with her mentor, Takeda, she ventures out on her first mission in Switzerland.

“The parts of the history we’re bursting to tell is the origin of the woman you see that shows up in the pilot, as differentiated from the girl who was thrown into [juvenile detention] when her dad was taken from her,” “Revenge” showrunner Sunil Nayar told USA Today.

The graphic novel was written by Erica Schultz and Ted Sullivan, a writer the executive story editor on the ABC drama.

“There is a difference between Emily and a regular vigilante. She’s not Charles Bronson — she doesn’t put a bullet in someone’s head,” Sullivan says. “She is a comic-book character. She has an identity — she’s a rich person who poses as a socialite during the day and at night exacts vengeance. Because she is such a complicated character and has a lot of villains in her past, graphic novels are a really natural fit.”

The novel will portray an Emily with faults and who makes mistakes, Schultz revealed, which fans will be able to connect with the future version of her that appears on the ABC drama.

“Revenge,” which stars Emily VanCamp and is currently in its third season, will return with new episodes on Sunday, March 9. It has yet to get an official fourth season renewal from ABC.