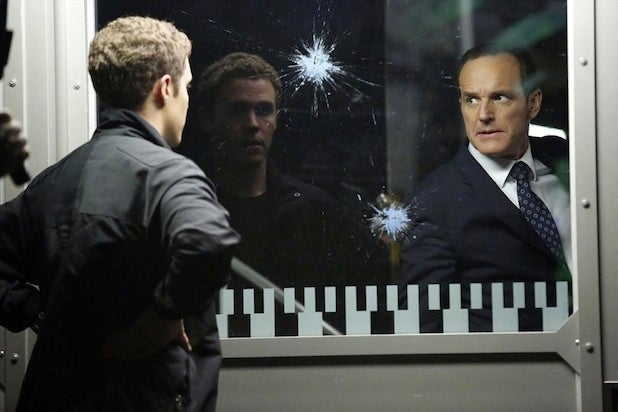 ABC has plotted not one, but two crossover episodes between its successful series “Marvel’s Agents of SHIELD” and the newly-released movie “Captain America: The Winter Soldier.”

And the second crossover episode, titled “Providence,” will air next Tuesday at 9 p.m. following an encore presentation of this week’s episode.

Here are the episode descriptions from ABC:

“Turn, Turn, Turn”: Coulson and his team find themselves without anyone they can trust, only to discover that they are trapped with a traitor in their midst.

“Providence”: Colonel Glenn Talbot on the trail of Coulson and his team, who seek refuge in the last place anyone would look, where they begin to uncover S.H.I.E.L.D.’S most dangerous secrets — secrets that could destroy them all. Bill Paxton guest stars as Agent Garrett, Patton Oswalt as Koenig and Adrian Pasdar (“Heroes”) as Col. Talbot.

Previously in another Marvel act of synergy, ABC aired a crossover episode with “Thor: The Dark World” and “SHIELD” last November, which portrayed the aftermath of the movie’s events. And the show was visited by Lady Sif (Jaimie Alexander) from the “Thor” franchise on the March 11 episode.

When asked by a PaleyFest audience member if any of the “SHIELD” characters will be in “Winter Soldier,” Loeb avoided answering the question and directed them once again to watch the movie.

Samuel Jackson, who appeared on two episodes of “SHIELD”, reprised his role of “SHIELD” head Nick Fury for “Captain America: The Winter Soldier.”

If the movie’s performance is any indication, ABC can expect a ratings boost for the “SHIELD” crossover episodes. “The Winter Soldier” was the biggest April opening in the U.S. ever, earning $92 million domestically, and $300 million worldwide since opening 10 days ago.