Voting membership in the Academy of Motion Picture Arts and Sciences has passed the 6,000 mark, according to a December 2013 branch count obtained by TheWrap.

With the relaxation of restrictions that were imposed more than a decade ago to keep membership stable below 6,000, the Academy has added 172 voting members over its totals from December 2012, moving from 5,856 prospective voters a year ago to 6,028 now.

A new branch count is prepared every December, prior to the beginning of voting for Oscar nominations. This year, voting begins on Dec. 27.

Also read: Why Oscar May Never Give Us 10 Best Picture Nominees Again

The Actors Branch, by far the Academy’s largest at 1,176 members, actually fell by two, despite the fact that it invited 22 actors to join in June.

The only other group to show a decline was Members-at-Large, which dropped by 38. That decrease can be explained by the creation of the new Casting Directors Branch, many of whose members were drawn from Members-at-Large.

The former Art Directors Branch was recently split, creating separate Costume Designers and Designers Branches. The membership of those two branches combined is exactly the same size as the 2012 membership in the now-defunct branch.

Even if every invitee opts to join, AMPAS ranks are thinned by deaths and by members who opt to retire and move to non-voting status.  According to the Memoriam page of the Academy website, 73 members have died in 2013.

In June, 276 people were invited to join, a record for the decade in which the Academy has announced invitees. 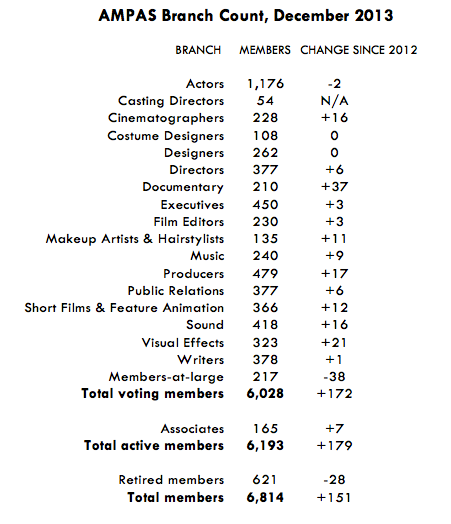