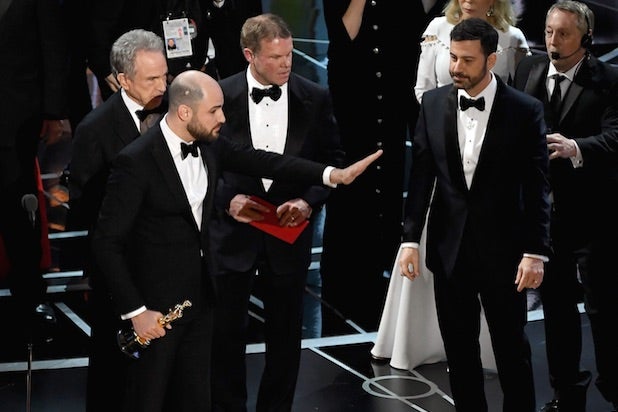 For the first time in decades, more than two people will know the identity of the Academy Award winners in advance of the Oscars ceremony.

As a reaction to the fiasco in which the wrong envelope was given to presenter Warren Beatty at February’s Oscars, causing Beatty and Faye Dunaway to announce the wrong Best Picture winner, the Academy’s accounting firm of PwC has agreed to add a third balloting leader to its team and put additional safeguards in place.

In return, the Academy has agreed to retain the firm, which has been handling Oscars voting for the last 83 years. It also performs other accounting services for AMPAS.

“We’ve been unsparing in our assessment that the mistake made by representatives of the firm was unacceptable,” said Academy president Cheryl Boone Isaacs in an email to members on Wednesday, following a Board of Governors meeting on Tuesday night at which the PwC mistake was the main order of business.

“From the night of the ceremony through today, PwC has taken full responsibility for the mistake. After a thorough review, including an extensive presentation of revised protocols and ambitious controls, the Board has decided to continue working with PwC.”

In the past, only two PwC accountants knew which films won Oscars in advance of the show. Those two balloting leaders carried two sets of envelopes to the show, and were stationed in the wings on each side of the stage to give the envelopes to the ceremony’s presenters.

But one of this year’s accountants, Brian Cullinan, inadvertently handed Beatty a Best Actress envelope — and neither he nor his PwC partner Martha Ruiz reacted quickly when “La La Land” was announced as the winner instead of “Moonlight,” despite a firm policy that PwC should stop the show immediately if an incorrect winner is announced.

Stationing a third person in the control trailer with the show’s director will increase the likelihood of a quick response in the case of error. In addition, PwC partner Rick Rosas will return to the role of Oscars balloting leader, which he handed for 12 years before he was replaced by Ruiz in 2015. The year before, longtime balloting leader Brad Oltmanns had been replaced by Cullinan.

Within days of the Oscars show, the Academy announced that neither Cullinan nor Ruiz would return to the balloting team in the future, though they are still with the accounting firm. A company spokesperson told TheWrap that Cullinan “remains a partner in good standing at PwC.”

PwC’s US Chairman and Senior Partner Tim Ryan has also vowed to take a bigger hand in overseeing the ballot team, according to the email from Boone Isaacs.

Other changes include the “removal of electronic devices from backstage.” Despite warnings against it, Cullinan was tweeting and posting backstage photos during the Oscars ceremony, including a shot of Best Actress winner Emma Stone that he posted right around the time when he gave the wrong envelope to Beatty.

Here is the full text of the email letter sent to Academy members by Boone Isaacs, which also discussed progress on the Academy Museum of Motion Pictures and upcoming board and executive committee elections:

Last night the Board of Governors met for the first time following what was, in so many ways, the most extraordinary and memorable Oscars ceremony in decades. As you may know, the Board meets approximately six times a year to discuss the business of the Academy.

One of the items on our agenda was to discuss PwC’s Oscar night mistake and review options moving forward that are in the best interest of our organization.

Heading into our 84th year working with PwC, a partnership that is important to the Academy, we’ve been unsparing in our assessment that the mistake made by representatives of the firm was unacceptable.

Throughout the last month, the Academy team has worked hand-in-hand with PwC to review our wide-ranging relationship – everything from Oscars voting, auditing, and taxes – during which we asked them to lay out for us a path and a process towards ensuring that everything will continue to the high standards the Academy expects and you deserve. From the night of the ceremony through today, PwC has taken full responsibility for the mistake. After a thorough review, including an extensive presentation of revised protocols and ambitious controls, the Board has decided to continue working with PwC. New protocols include:

· A greater oversight role for PwC US Chairman and Senior Partner, Tim Ryan.

· PwC partner Rick Rosas will return to the Academy account as co-balloting leader, a function Rick performed flawlessly for more than 12 years. We will add additional key balloting partners in the coming months.

· The PwC on-site team at the Oscars will now include a third balloting leader with knowledge of award winners who will sit in the control room with the show’s director throughout the ceremony.

On another note, I also have terrific news to report about progress on a project that excites all of us: the development of the Academy Museum of Motion Pictures, which will open its doors in 2019. The first phase of construction is now complete, which included renovating the historic Wilshire May Company building, and excavating and creating new underground spaces that will house exhibits that will bring our industry to life. During this next and final phase of the project, we will continue the work on the May Company building, and begin building the breathtaking Renzo Piano-designed sphere that will include our 1000-seat David Geffen Theater and the Dolby Terrace. Stay tuned for updates and thank you for your support of this endeavor.

Last night Tom Hanks, who co-chairs the museum’s capital campaign, brought the future Academy Museum to life by presenting a spoken tour of the space. We look forward to sharing these plans as they continue to evolve.

Last of all, just a reminder about one of the very best ways you can keep contributing to the Academy each day of the year: in April, you’ll receive information about running for a seat on the Academy’s Board of Governors and your Branch Executive Committee. Please think about seizing this opportunity to write the Academy’s next great chapter. The more you get involved, the stronger we can be together.

Membership has its privileges, but it also has its responsibilities. We need you.

Shock, disbelief, tears and laughter as Barry Jenkins’ drama lands Best Picture Oscar after it was mistakenly given to “La La Land”

No one was prepared tonight for what may have been the biggest on-stage mistake in the history of the Oscars, when "Moonlight" took home the award for Best Picture -- only after it was first mistakenly given to "La La Land." Here are the best reactions from the stars at the Oscars.