The controversial decision not to include actress Farrah Fawcett in the Oscar show’s "In Memoriam" segment was made because the actress’ signature roles came on television, not in films, says the Academy’s executive director, Bruce Davis.

"Among the actors considered for this year’s sequence, Gene Barry and Farrah Fawcett were the toughest calls for the committee," Davis tells theWrap.  "In both cases, the fact that they were much better known for their television work than their motion picture performances drove the decision to omit them from our feature."

Earlier, an Academy spokesperson had called the exclusion an "unfortunate reality."

Best known for her work in television shows like "Charlie’s Angels," Fawcett made a number of feature films, including “Logan’s Run,” “The Apostle” and “Extremities."

Fawcett was a member of the Academy, one of 90 who have died since February 1, 2009, the opening date for inclusion in this year’s memoriam package. Michael Jackson, who was included, was not a member; neither was actress Bea Arthur, whose omission also was noted by some. 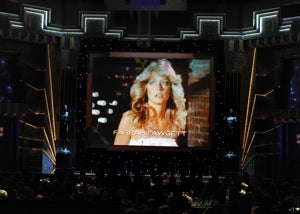 This year’s memoriam, which was accompanied by singer James Taylor performing the Beatles song “In My Life,” was put together by Oscar-winning director Chuck Workman, who has assembled films for the Oscar show for the past 20 years.

Determination of who goes into the memoriam package is made by an Academy committee, one of the few instances where AMPAS has direct creative input into an element of the Oscar show.

Workman says the Academy gave him a list of the 33 names they wanted included; the day that list was submitted, news of Kathryn Grayson’s death broke. The Academy "considered holding her for the next year, but in the end she was included," says Workman, who told AMPAS that he could fit her into the film in the short time frame required.

The Academy, according to Workman, also requested that the film begin with Patrick Swayze and end with former AMPAS president Karl Malden.

According to the "Members Memoriam" maintained on the AMPAS website, 12 of the artists included in this year’s package were not Academy members.  They include actors Lou Jacobi and Jennifer Jones, director Eric Rohmer, writer Budd Schulberg, cinematographer Jack Cardiff and journalist Army Archerd.

A report at Hollywood 411 suggested that Oscar-winning composer Maurice Jarre was also among those left out of the memoriam, but Jarre was in fact included.  He was the second person in the montage — but at that point director Hamish Hamilton’s camera was still panning toward the screens onstage, making it extremely difficult to see his name, or the name of actor Monte Hale, who followed.

Several years ago, after a memoriam that was widely criticized for failing to include actress Dorothy McGuire, the Board of Governors considered eliminating the segment from the Oscar show.

"It is a beloved segment, but I would much prefer we didn’t do it," the Academy’s Davis has said.  " … When you sit down to do the list, the last 15 or 20 cuts you make are people with substantial careers.  You just feel like s— for days afterwards. And there is nothing you can say to somebody’s wife or daughter about why they didn’t make it into the sequence."