The Academy unveiled its most complicated, high-tech Oscar set ever at a Wednesday morning press conference in the lobby of the Kodak Theater, where the show’s crew now has about 14 days to mount and fine-tune the collection of rotating LED panels, turntables, film projection screens and mirrored curtains before the stars start showing up.

“We have two weeks to get it right, and the best technical people in the world,” said show co-producer Bill Mechanic after the unveiling. “Two weeks to get all the bugs out. One of the risks of being ambitious is that you could trip. But if we don’t trip, you’re going to get one of the most dynamic shows that you’ve ever seen.” 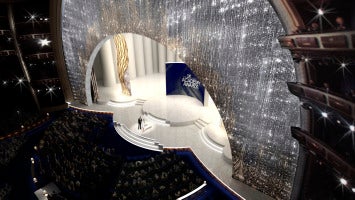 The set was designed by David Rockwell, who did the Oscars for the first time last year, although he and his firm also designed the Kodak Theater itself. Rockwell’s set for 2009’s 81st Oscar show, was, said co-producer Adam Shankman, “one of the stars of last year’s show.”

Rockwell said he’s bringing back the reconfigured seating on the orchestra level of the Kodak, which was introduced last year and created a more intimate feel by wrapping around part of the stage.

Also back for an encore: what Rockwell called the “fabulous bling” of the Swarovski Crystal Curtain that hangs from the proscenium and frames the stage.

The stage itself, said the designer, is meant to be “a clean, white, pristine environment” inspired by “Hollywood’s modernist heyday.” The creative key to the set, he added, is “the idea of being immersed in the movies.” To that end, stars will appear from different locations on the set, sometimes appearing to emerge from inside screens. 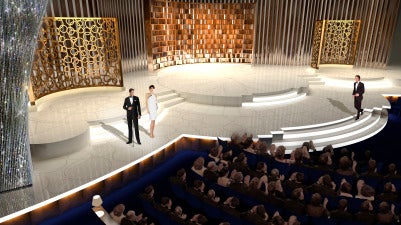 Other elements of the set include three revolving platforms (Rockwell called them “turntables”) on the two-level stage, as well as the abundant use of mirrors to bring the audience and the performers into closer contact.

“It’s the most complicated set we’ve ever done, by far,” said associate producer Michael Seligman, a veteran of more than 30 Oscar shows. “We have redundancy after redundancy to make sure it works.”

After Rockwell unveiled a model of the set, he showed an animated mockup of the how the stage will work, showcasing a few of the many different looks and transformations the stage will undergo.

During that animated presentation, only one recognizable image from a film was shown on a screen. It wasn’t from “Avatar” or “The Hurt Locker,” but from “Gone with the Wind.”