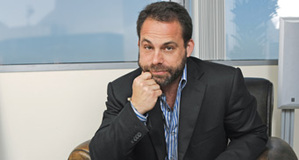 …but just a taste of what’s going to be coming. Alex Ben Block has a a very good piece of reporting in today’s Hollywood Reporter, in which he interviews the unpopular partner in ThinkFilm, David Bergstein, who is facing a series of lawsuits and whose financing troubles have left a host of movies in limbo and creditors in a state of fury. Block lets Bergstein have his say: "Our business plan is not so much about the movie business… It’s really to build a global digital distribution business. It’s based on the expectation that in the not too distant future most content will be delivered digitally and on-demand."

But then Block goes on to cite the reasons why Hollywood has learned to loathe this guy, selling off films that he committed to release, cancelling others and scheduling no release dates for some recent pick-ups from Sundance. This summer’s debacle with David O. Russell’s film "Nailed" – production was shut down repeatedly by the guilds over lack of payment – has been the most public of the company’s travails. Bergstein appears to be well and truly out of money.

Bergstein is an accidental mogul, getting into Hollywood because he loaned former dry cleaner/clubber Elie Samaha money and then inherited Samaha’s library when Franchise Pictures went bust. Then in 2006, Berstein and a construction pal, Ron Tutor, bought Thinkfilm for a reported $18 million from Jeff Sackman and Co., a well respected indie.  But apparently Bergstein knows little about how business is done here. I’ve been hearing for weeks about people stiffed by Bergstein – advertising companies, publicists, producers and their actor-partners – after having been made promises, and after cutting their fees to get a green light from Bergstein.

There’s a lesson here somewhere. "When people are desperate to get their movie made, they’ll make a deal with the devil," said one embittered producer, who is owed about $200,000. "You know he’s gonna f— you. But at least you get your movie made."