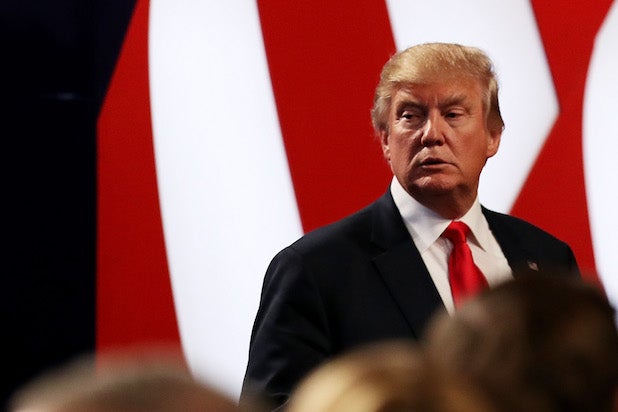 The American Civil Liberties Union backed down from its pledge to sue President Donald Trump over  his “religious freedom” order, and is instead taking its fight to the court of public opinion.

In a Twitter storm mocking the president for keeping the status quo for churches and politics, the ACLU suggested there was no need to bother filing a lawsuit.

“We thought we’d have to sue Trump today. But it turned out the order signing was an elaborate photo-op with no discernible policy outcome,” @ACLU tweeted after Trump signed the order Thursday.

Also Read: ACLU Backs Trump on First Amendment Right to Shout 'Get 'Em Out of Here!' at Rally (Video)

We thought we'd have to sue Trump today. But it turned out the order signing was an elaborate photo-op with no discernible policy outcome.

Critics had said an earlier version of the order would have given broad power to religious groups to ignore anti-discrimination laws.

In a tweet, @ACLU said, “Trump merely provided a faux sop to religious conservatives and kicked the can down the road on religious exemptions on reproductive care.”

Although Trump pledged to “destroy” the 1954 Johnson Amendment — a federal law prohibiting churches and other non-profit religious groups from explicitly endorsing or opposing political candidates — the order keeps the same prohibition in place.

Trump merely provided a faux sop to religious conservatives and kicked the can down the road on religious exemptions on reproductive care.

Trump has no power to repeal the Johnson Amendment with an executive order. Congress would need to repeal or amend the federal law.

The ACLU derided Trump for his Johnson Amendment pledge, tweeting that “Trump’s assertion that he wished to ‘totally destroy’ the Johnson Amendment with this order has proven to be a textbook case of “fake news.”

Trump’s assertion that he wished to ‘totally destroy’ the Johnson Amendment with this order has proven to be a textbook case of "fake news."

Trump’s executive order also directs the IRS not to take “adverse action” against churches and other tax-exempt religious organizations for participating in political activity without endorsing or opposing specific candidates — but that is part of the current law.

The section of the order that might be challenged by civil rights groups in the future directs federal agencies to provide “regulatory relief” for organizations that cite religious beliefs to object to the part of the Affordable Care Act, aka Obamacare, that requires employers provide certain health services, including contraception coverage.

The ACLU warned it might sue in the future depending on how federal agencies act in response to the section of Trump’s order directing federal agencies “to explore religious-based exceptions to healthcare.”

“In the event that this order triggers any official government action at all, we will see Trump in court, again,” the ACLU tweeted.

The ACLU and other groups threatened to sue the Trump administration after a draft copy of the executive order was leaked, revealing that the proposed order appeared to legalize discrimination against women and members of the LGBT community.

“President Trump’s executive order on free speech and religious liberty, while welcome, is rather weak,” Ryan T. Anderson, a research fellow at the conservative Heritage Foundation, wrote in an opinion piece in The Hill.  “It is woefully inadequate in meeting the challenges of our time. … Congress must act, therefore, to address the major threats to religious liberty in the United States today.”

“Now obviously, if this is the end of the story, I’m really disappointed, but I think we ought to hold out the hope that this is just the beginning and that there are more steps to be made,” Burnett said.

In the past 60 years, the IRS has stripped only one church of its tax-exempt status — after the church placed a full-page ad in a newspaper urging a vote against Bill Clinton.