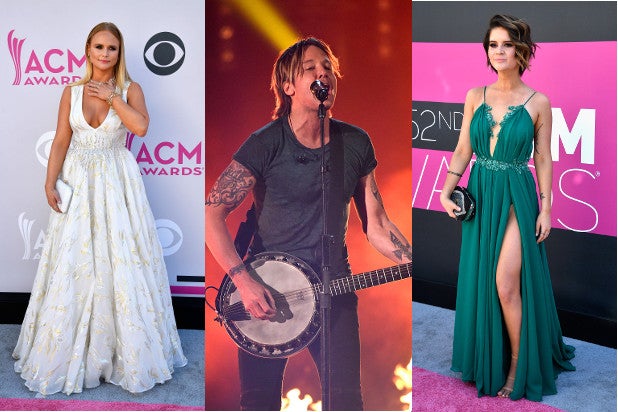 We expected a whole lot of music and that’s exactly what we got at the 52nd Academy of Country Music Awards (ACM Awards) on Sunday.

Jason Aldean took home the ceremony’s biggest award — Entertainer of the Year — at the end of the night for the second year in a row. Miranda Lambert, the Brothers Osborne, and Thomas Rhett, however, were the night’s biggest winners, taking home two awards each. Lambert took home Female Vocalist of the Year and Album of the Year (“The Weight of These Wings”), while Thomas Rhett was the year’s best male vocalist and had song of the year (“Die a Happy Man”). The Brothers Osborne took home both Vocal Duo or Group category awards.

The awards brought the biggest names in country together in Las Vegas, and most of were not only nominated, but took to the stage to perform. Lauren Daigle, Faith Hill, Sam Hunt, Tim McGraw, Rascal Flatts, Reba McEntire, Thomas Rhett, Chris Stapleton, Cole Swindell, Carrie Underwood and Keith Urban were just a part of the lineup.

But how did the ACM Awards fit all these performances into a few hours? That’s where collaborations came in. Reba McEntire and Lauren Daigle teamed up;  Tim McGraw and Faith Hill; Thomas Rhett and Maren Morris; Keith Urban and Carrie Underwood; and Florida Georgia Line and the Backstreet Boys.

Urban led the pack of nominees with seven, including Entertainer of the Year. Miranda Lambert and Maren Morris were tied for second with six nominations each.

The show was hosted by Luke Bryan and Dierks Bentley, who have been sharing hosting duties since 2013.

Here are this year’s winners: