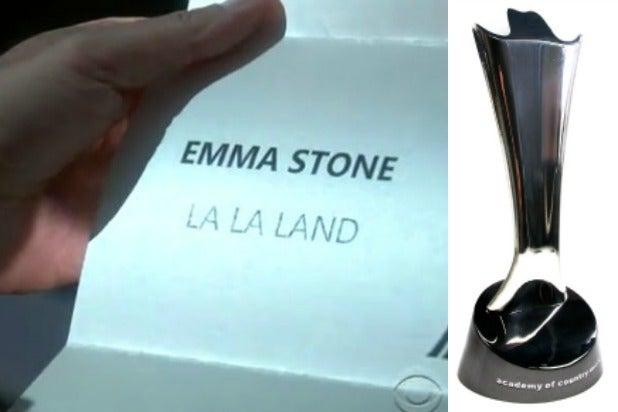 It’s the most obvious punchline in Hollywood right now, but the Academy of Country Music Awards (ACM Awards) went for it Sunday night.

Early on in the show, David Copperfield and Nancy O’Dell took to the stage to announce the winner of Song of the Year.

Before reading the name on the envelope, Copperfield looked at the audience and said the winner was… Emma Stone from “La La Land.” To drive the joke home, the awards had even printed out a special envelope with Stone’s name on it, which he flashed to the camera.

And because this is David Copperfield, he and O’Dell used a little magic to bring out the appropriate envelope.

The award actually went to Thomas Rhett, who won for his hit “Die a Happy Man.” Despite getting his moment a bit overshadowed, he still laughed about the joke.

What a year it has been for @ThomasRhett. ???? Congratulations on taking home Male Vocalist of the Year at the #ACMs! pic.twitter.com/3hK9BWIBdF

It was an easy gag to play, considering it’s only been a month since the famous flub at the Academy Awards when presenters Warren Beatty and Faye Dunaway were handed the wrong envelope for “Best Picture.”

At least the ACMs went the extra mile and made a prop to pull off the joke.