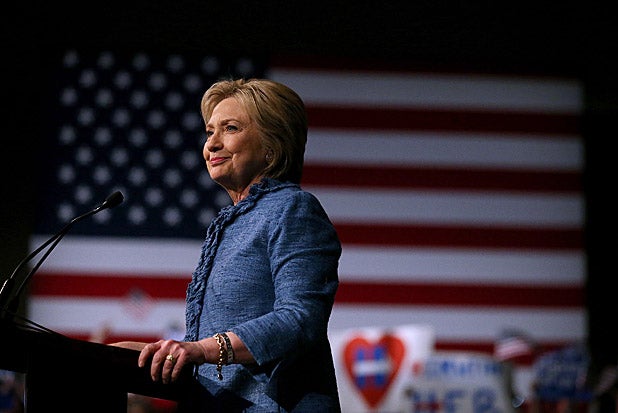 AIDS advocates seizing on Hillary Clinton’s gaffe about Nancy Reagan’s “low-key advocacy” to fight the disease are demanding the Democratic frontrunner prove her support by pledging to end AIDS by 2025.

Seventy activists from across the country are trying to make the best of Clinton’s statement by using it to propel HIV/AIDS to the forefront of the 2016 presidential campaign — in which it has not been a major issue previously. They released an open letter to Clinton on Tuesday.

“Silence still equals death, Secretary Clinton,” said the letter, obtained by TheWrap. “We now have the tools to stop HIV transmission and AIDS deaths, and some of our most affected urban centers like New York City and San Francisco are making dramatic progress towards realistic goals to end their epidemics as early as 2020.”

The advocates include representatives of the Human Rights Campaign, Gay Men’s Health Crisis, and ACT UP New York.

Among the demands, advocates want Clinton to appoint an HIV advisor for her campaign, set a meeting with AIDS/HIV activists, offer a “viable plan” to end the national epidemic, and increase funding to fight the disease by at least $2 billion per year by 2020. They also want the pledge to end the epidemic by 2025.

They asked her campaign to respond by Friday.

“Secretary Clinton’s mischaracterization of the Reagan Administration was deeply hurtful, especially to those of us who advocated for our dying loved ones during that time,” longtime activist Peter Staley — who was featured in the Oscar-nominated documentary, “How to Survive a Plague,” said in a statement on Tuesday. “But now we have an opportunity to challenge all of the presidential candidates to publicly announce their commitments to end the AIDS epidemic in the U.S.”

The letter says Clinton’s comments about Reagan “created an opportunity to bring HIV/AIDS to the forefront of the conversation during this campaign season.”

Also Read: Hillary Clinton's Reagan-AIDS Gaffe Could Be Bigger Than You Think

While the letter makes it clear that Clinton’s comments did not sit well with those who’ve lost loved ones to the epidemic, it also makes a point of calling Clinton a staunch supporter of the fight against the virus.

“We know that your longer-term political record reflects a true commitment to the HIV/AIDS response and to universal access to affordable health care The Clinton Foundation has dedicated many resources and played a crucial role in many milestones,” the letter said.

“It may be hard for your viewers to remember how difficult it was for people to talk about HIV/AIDS back in the 1980s. And because of both President and Mrs. Reagan — in particular, Mrs. Reagan — we started a national conversation when, before, no one would talk about it, no one wanted to do anything about it. And that too is something that I really appreciate, with her very effective, low-key advocacy, but it penetrated the public conscience, and people began to say ‘Hey, we have to do something about this too.'”

Both Ronald and Nancy Reagan have been widely criticized for ignoring the AIDS epidemic, which started during Reagan’s second year in office. Reagan didn’t even mention the word AIDS publicly until late into his second term. By then scores of people were infected with and dying from the virus, among them Reagans’ close friend, actor Rock Hudson, on whom Nancy reportedly turned her back when he asked for help to secure treatment.

When asked by a reporter about a horrifying new disease called AIDS that was ravaging the gay community in October of 1982, Reagan’s press secretary, Larry Speakes, replied, “I don’t have it … Do you?” The room erupted in laughter. At the time, more than 700 cases of AIDS were reported in the U.S. and more than 600 people died of the disease, according to amfAR.