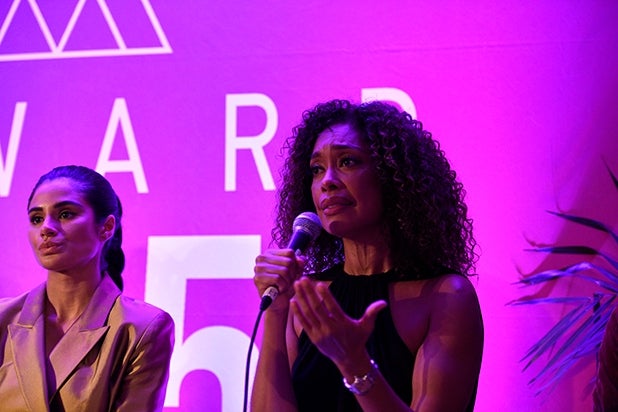 “Pearson” actress Gina Torres said it’s not enough for women of color in Hollywood to be good.

“The cross that we bear as people of color in this industry is that we have to be extraordinary,” she said Friday at the WrapWomen’s Power Women Summit on Friday. She was part of an actors panel that also included Diane Guerrero, Stephanie Beatriz, Sarah Shahi and Kelly McCreary.

Each of the women shared stories of how they were treated when they first started in the entertainment industry.

“My unique perspective here is that I’m Cuban-American. Both parents are Cuban. And I grew up Catholic in the Bronx, so my experience was not that of an African-American youth. Very different experiences, which a lot of people did not or would not understand or recognize, because I present as African-American,” Torres said.

“I [was] growing up as an actress in the ’80s when the urban drama was taking off. You had Spike Lee coming in, John Singleton coming in — and I simply was not black enough. To work meant I had to somehow shut down a very deep part of myself. I had to learn what it was to be black, because there was no such thing as Afro-Latina in the ’80s. That’s completely new. All Latinas looked European. There was no room for me,” she continued.

Torres’ advice: “It’s about being stubborn, being youthful, never saying no, walking into a room and giving what I had to give specifically. It didn’t matter to me necessarily what they thought or what box they were gonna put me in. I was going in as myself.”

Also Read: Rachel Zoe on How 'Rachel Zoe Project' Became About Her - Which Wasn't the Plan

“Orange Is the New Black” star Diane Guerrero said that when she started in television, “the doors were so closed.”

“They were just shut — until there was some prison show and I was able to audition for that,” she joked.

Before “Orange Is The New Black” came along, she said, “I was still not getting [roles like] Gangster Number 2’s Girlfriend.”

“City on a Hill” actress Sarah Shahi said she also learned she would need to work harder than most people.

Also Read: Jenna Dewan on How Motherhood Has Changed Her Life and Career

“I’m Persian, and as far back as I can remember, it’s never been cool to be Persian. I grew up in Texas with a single mom. My father was a drug addict, so we were on our own. From a very young age, my mom and I were in and out of women’s shelters when I was a kid,” she said. “She taught me that if I wanted to get ahead, I had to be twice as smart and twice as good and I had to not give up.”

“When I moved here and started doing television, I found very quickly that I was either a victim of a crime, a perpetrator of a crime, or had an accent that didn’t belong to me,” she said.

“So I found it really really frustrating for the first huge chunk of my life here in Los Angeles,” she said. “It still is constantly fighting stereotypes.”

“Grey’s Anatomy” actor Kelly McCreary had a similar experience. When she started in television, she “didn’t always understand that even though they said ‘colorblind casting,’ they didn’t always mean that.”

“My first TV experience was in commercials. I would frequently have people saying to me, ‘Can you do this more urban?” I finally had the audacity and the naïveté of somebody who felt unstoppable… and I said, ‘Do you mean black? Because I am black. And this is what blackness looks and sounds like.”

TheWrap’s 2019 Power Women Summit took place Thursday and Friday at the Fairmont Hotel in Santa Monica. The event brings together the industry’s most influential women to drive “Toward 50/50” equity and inclusivity in entertainment and media.

The summit aims to inspire and empower more than 1,000 women across the landscape of their professional careers and personal lives. This year, the summit was held at the beautiful Fairmont Miramar Hotel in Santa Monica with the backdrop of the beach and the hotel’s iconic fig tree.

Presented by WrapWomen Foundation, the non-profit arm of TheWrap, the event will provide two days of education, mentorship, workshops and networking to promote the goal of greater women’s leadership in this industry, and gender balance in media, entertainment and technology overall.