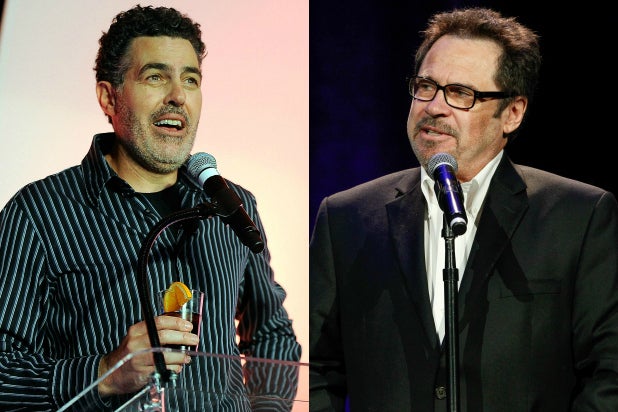 Adam Carolla and Dennis Miller may have just given fans something to truly be pissed off about.

The newly formed duo’s much-publicized “PO’dcast” is “on hiatus” after just six episodes, Carolla tweeted on Wednesday. The “Road Hard” star explained that he needed to “deal with Season 3 of ‘Contractor,” referring to his Spike TV show, “Catch a Contractor.” The cable TV show is currently in early production for its forthcoming run of episodes. The reality series’ shooting schedule began two weeks ago and should last through at least June, if not longer, a person with knowledge of the situation told TheWrap.

“PO’dcast” hails from PodcastOne, who told TheWrap, “We hope to have it back on in July.”

There hasn’t been a new episode of the one-hour weekly podcast collaboration since Mar. 7, and it’s been removed from the Carolla Digital dropdown menu on the former “Man Show” host’s website.

The extremely busy Carolla later specified via Twitter that “nothing changes with ‘The Adam Carolla Show,'” his main, super-popular podcast.

Members of the reigning podcast king’s camp did not immediately respond to TheWrap’s request for comment or clarification on the future of the program in question.

The audio show, formerly called “PO’d,” debuted Saturday, Jan. 17 on PodcastOne, the purported leader in advertiser-supported, on-demand digital audio. PodcastOne carries more than 200 programs that are downloaded over 120 million times monthly, according to the company.

Later dubbed “PO’dcast,” the show saw its two hosts working together remotely. On several occasions, Miller jetted before Carolla officially closed the show. At other moments, there were technical issues with their connection.

po’dcast is on hiatus while i deal with season 3 of contractor. thanks everyone for listening. get it on