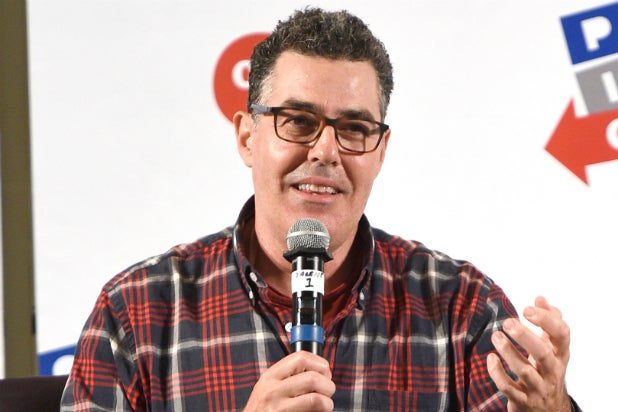 Anyone who just started listening to “The Adam Carolla Show” is late to the party — 10 years late, to be exact. Adam Carolla will still take you aboard his “pirate ship,” however.

On Sunday, “Man Show” alum Adam Carolla will celebrate his 10-year anniversary of podcasting (and WITH his old “Man Show” partner Jimmy Kimmel — more on that in a bit). Yeah, the medium has been around that long, and no, Carolla can’t believe it either.

“I’ve always looked at ‘Loveline’ as sort of my career-defining moment in radio, but I’ve either surpassed it or I’m about to surpass it,” Carolla told TheWrap ahead of his March 10 celebration.

Sunday won’t just be a party — it will also be a live podcast. That’s an appropriate carousal considering Carolla pretty much invented that gig.

“The live show, playing the theater format in the podcast world — as a comedian and not sort of as an NPR thing — I do take some credit for that. Certainly for opening it up to the venues,” he said. “There was a learning curve 10 years ago when we were getting started on live podcasting. The venues were like, ‘What are you talking about? Are you doing standup?'”

“Now they get it,” Carolla added.

Carolla is not just doing a victory lap over his place in the medium’s history books. The live “ACS” shows have been incredibly valuable to the podcast becoming a sustainable business.

“It kinda started to sink in when we started to sell out all of these live shows around the country,” Carolla said of finding his new career. “It became clear that people were listening.”

Before then, “I was just sitting in a room talking into a microphone,” he added. But selling out rooms “from Minneapolis to Miami” gave the father of twins a level of comfort after being fired from radio, he said.

As a matter of fact, pretty much the only thing that helped out more in that capacity is when Norm Pattiz and PodcastOne put Carolla under a big contract, he told us. The two parties have since re-upped for five more years.

We asked Carolla what else has been particularly fruitful for him as an unlikely revenue source in a format that’s not known for big bucks.

“The Amazon affiliate program worked out much better than we thought,” he said, referencing the e-commerce giant’s click-thru ad on his website.

Who would have thought a company with an $800 billion market cap could share some of its revenue?

Carolla and his gang — including Kimmel — will “get it on” Sunday at the Petersen Automotive Museum in Los Angeles, Calif.