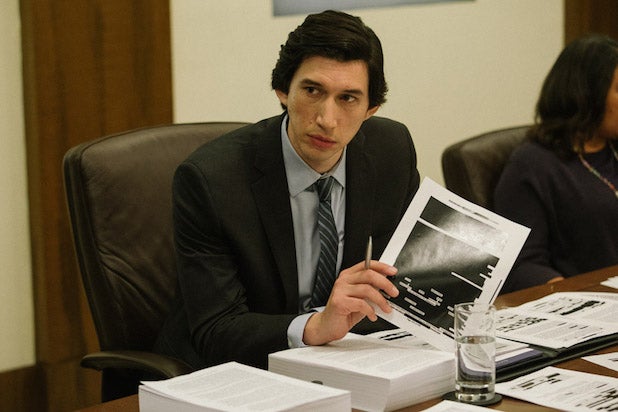 Amazon Studios will release the political thriller “The Report” in movie theaters on Sept. 27, the studio announced on Thursday. The studio will then drop the film on Amazon Prime Video on Oct. 11.

The film, which stars Adam Driver, Annette Bening and Jon Hamm, takes place in the aftermath of the 9/11 attacks, as CIA agents begin using extreme interrogation tactics on people they think were behind it. The film follows one man’s pursuit of justice and adherence to oversight and accountability and chronicles not only the CIA’s secret torture program but also the struggle to release the report that tested the nation’s separation of powers and the rule of law.

Amazon snapped up the indie for $14 million following its premiere at January’s Sundance Film Festival.

“‘The Report’ is an enthralling, investigative thriller featuring pitch perfect performances and brilliant storytelling from Scott and the entire team,” Amazon Studios head Jennifer Salke said in a statement. “We are so proud to share this uniquely authentic and incredibly timely story about a true, American hero and his quest for truth and justice with our global Prime Video customers.”

It was one of the hot titles at the 2019 Sundance Film Festival where it had its world premiere. “The Report” will likely be an awards play for Amazon.

“Our hope with ‘The Report’ has always been that we would find a way for it to reach the largest audience possible,” Burns said. “We are thrilled that Amazon Studios is putting so many resources behind reaching that goal.”