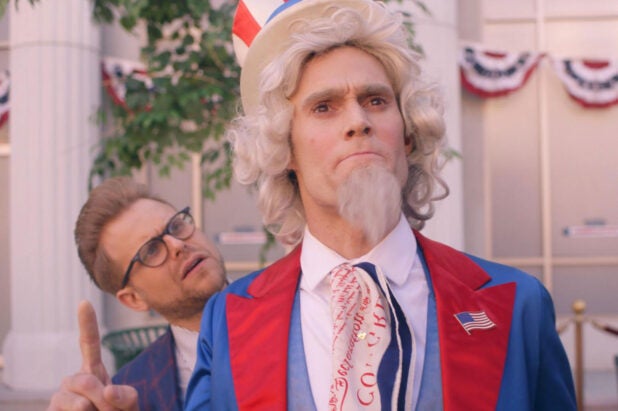 In the first scene of Tuesday’s episode of truTV’s “Adam Ruins Everything,” a jolly Uncle Sam figure marches through a town square, proclaiming his love for the U.S.A. to a crowd of patriotic archetypes — Lady Liberty, Johnny Appleseed and Rosie the Riveter.

“Dang, I love America! It’s the most fair, democratic, perfect country on earth!” he says, only to be cut off by the host, Adam Conover, flying above and letting out a long “actually” before landing in front of Sam. True to the show’s title, Adam is intent on ruining everything, and that “everything” includes Uncle Sam’s — or at least some of the societal myths he believes in.

After two full seasons of tackling common misconceptions about everything from gun laws to hygiene, “Adam Ruins Everything” is setting its sights on the good old U.S.A. for its midseason premiere August 13. Conover told TheWrap that this is a subject that the informational comedy show might not have been able to handle in its earlier seasons.

“We’re always looking to go into topics more deeply, to be able to do topics that are, for lack of a better word, more controversial or more difficult to do. The sort of double Black Diamond topics,” Conover said.

But even as the show wades into loaded topics like economic mobility and the Constitution, it maintains its basis in fact and research. Citations are clearly displayed on-screen and real-life experts in science, history and politics make frequent appearances in the cartoonish world of the show. These experts do add to the show’s credibility, but Conover admits that they also add to its entertainment value.

“The audience can tell instantly that they are not trained actors,” he said. “The fact that they’re game and giving it an effort is what makes them funny and charming.”

“On TV, I only get talk to them for a couple of minutes, but…we would have these incredible conversations on set, in between takes or over lunch,” Conover said.

These behind-the-scenes conversations inspired his new podcast, “Factually! with Adam Conover,” a sort of companion to the TruTV show that allows the professors, activists and researchers featured on the show to discuss their field in depth. Recent episodes on the Earwolf-produced show have explored the perceived link between video games and violence, the science of sleep and the legacy of the American Civil War.

Conover has built a career on what he calls “investigative comedy,” a combination of education and entertainment that focuses on dispelling false cultural narratives and uncovering hidden truths about everyday life. He found this niche while writing for CollegeHumor, where he wrote and starred in the “Adam Ruins Everything” web series, playing a heightened, know-it-all version of himself who shares facts with good intentions, but without much tact.

“The Adam character is based on a younger version of myself, because I’ve always collected the kind of information that I tell on ‘Adam Ruins Everything,” he said. “The way that I correct people on the show, I don’t advise people do in their real life. It’s rude. What I say in the writer’s room is that he’s always factually correct, but socially incorrect.“

Still, there are certain virtues to being someone who ‘ruins everything,’ Conover says. “I think that at the end of the day correcting misinformation and questioning what we think we know as a habit of mind is incredibly important…one of the purposes of the show is to make people feel inspired, make them feel curious and remind them that they have the power and ability, I think responsibility can make change in the world.”

New episodes of “Adam Ruins Everything” air Tuesdays at 10 p.m. on truTV.