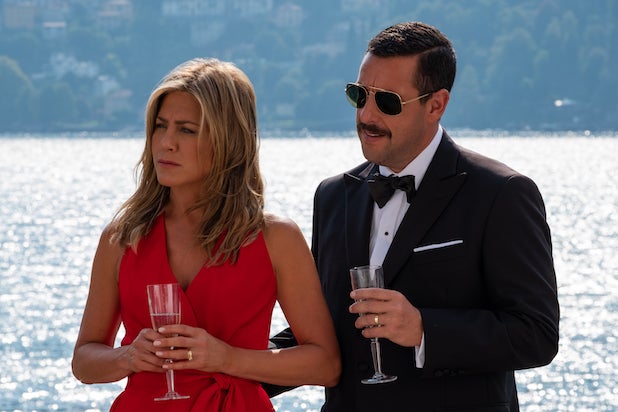 Turns out, you don’t need a viral stunt to attract millions of views on Netflix. Adam Sandler and Jennifer Aniston’s latest film, “Murder Mystery,” just enjoyed the biggest opening weekend in Netflix’s history, the streaming giant revealed on Tuesday, with nearly 31 million accounts watching the new comedy in its first three days on the service.

Between last Friday and Sunday, “Murder Mystery” was viewed by (rounding up) 13.38 million accounts in the U.S. and Canada, along with another 17.5 million international views, Netflix’s comedy account tweeted.

And sorry, Sandra Bullock, but that puts Sandler and Aniston on pace to break Netflix’s record for first-week views, set by “Bird Box” last December with 45 million views. (That record is up for debate, though, after Nielsen said “Bird Box” only pulled in 26 million views in its first week.) You might remember the movie inspired the “Bird Box challenge,” where people attempted difficult tasks while blindfolded, something that prompted Netflix to essentially beg its viewers to stop participating.

Netflix’s Tuesday tweet stands out, considering how the company notoriously guards its viewer data. As TheWrap previously reported, Netflix counts a “view” for its movies as an account having watched at least 70% of the film’s runtime, including the credits. Since “Murder Mystery” is 97 minutes long, that means viewers watched at least 68 minutes of the movie.

In the action-comedy flick, Aniston and Sandler team up as framed criminals on the run. Sandler plays a New York detective who, after 15 years of marriage, finally takes his wife (Aniston) on a long-promised European trip. When Aniston meets a charming and wealthy British man (Luke Evans), they’re invited to an intimate family gathering on a yacht of an elderly billionaire, only to be present when the man is murdered. They become the prime suspects in a modern day whodunit.