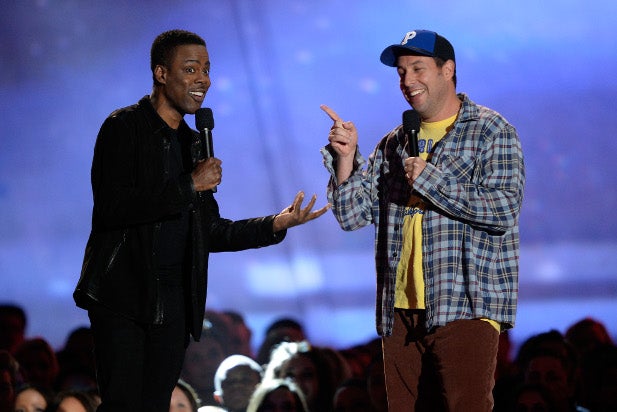 Adam Sandler and Chris Rock are joining forces in a new Netflix marriage comedy set to debut in 2018.

“The Week Of” is set to be filmed in Long Island, New York this summer with “Saturday Night Live” veteran Robert Smigel in the director’s chair.

The film tells the story of two fathers — played by Rock and Sandler — whose kids are getting married to each other. The week in the title refers to the time period before the wedding as the two families prepare for the big event.

Rock and Sandler — who are both “Saturday Night Live” veterans — have collaborated before, most recently on “Grown Ups” and “Grown Ups 2.”

“Adam Sandler and Chris Rock are cornerstones of the Netflix comedy family and we are over the moon about these two legends reuniting to give our members worldwide a healthy dose of the hilarity that they have been creating together for years,” said Netflix’s chief content officer Ted Sarandos.

Adam Sandler and his production company, Happy Madison Productions, and Allen Covert will serve as executive producers. Sandler and Smigel co-wrote the script.

This is the fourth movie to be created in Happy Madison Productions’ original deal with Netflix, following “Sandy Wexler,” “The Ridiculous 6,” and “The Do-Over.” The deal was recently extended to include four more films.

Sandler’s films for Netflix haven’t been a success critically, but they’ve been a hit for Netflix. In a recent report, the streaming service said users have spent more than “half a billion” hours watching his films.