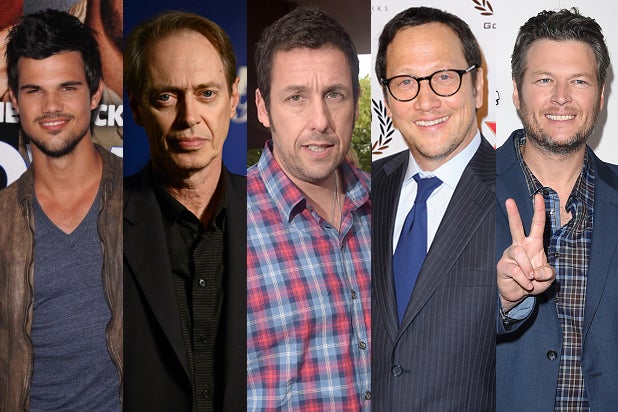 Adam Sandler has lined up a ridiculous cast for “Ridiculous 6,” a Happy Madison production that will be the first film under his groundbreaking deal with Netflix, TheWrap has learned.

Netflix declined to comment on the casting but confirmed that “Ridiculous 6” will be Sandler’s first Netflix feature and that production will start in February. Sandler wrote the script with frequent collaborator Tim Herlihy.

“Ridiculous 6” puts a comedic spin on ensemble westerns like “The Magnificent Seven.”

Insiders describe the roles as follows: Sandler will play man who grew up as an orphan among an Indian tribe. Lautner, Schneider, Wilson and Crews are poised to play his half-brothers, while the final half-brother has yet to be cast.

Nolte will play Sandler’s long-lost father; Parnell a bank manager; Lovitz a wealthy industrialist and Cummings his flirtatious wife. Forte and Trejo will play the leaders of rival gangs, while Buscemi will play a local jack-of-all-trades.

In a fun bit of casting, Shelton (who just hosted “Saturday Night Live”) is in line to play Wyatt Earp, while Vanilla Ice has been tipped to play Mark Twain.

“Ridiculous 6” was previously set up at both Sony and Paramount before the project moved to Netflix once Sandler signed a lucrative deal to produce four movies for the streaming company. The production pact was announced in October, and more projects will be announced in the coming months.