Adele may be the queen of breakup ballads — or at least one of the queens, alongside Taylor Swift — but on Sunday night, she helped two fans get engaged during her “Adele One Night Only” special, which aired on CBS. And she was really relieved it went according to plan.

“I need every single person to be really bloody quiet, all right?” she said during the taped TV special, explaining to the audience what was about to happen and signaling that the couple was coming out. “Let’s turn the lights down. If you make a noise, I’m gonna kill you.”

With the lights completely down, the couple came around the corner — the future bride-to-be wearing a blindfold and noise-cancelling headphones — to what looked like an empty area in front of L.A.’s Griffith Observatory. After a tearful exchange, the engagement went off without a hitch (just the promise of one) and the lights came up to reveal Adele on stage and her celebrity friends in the audience. 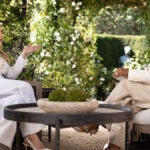 Also Read:
Adele Says Her Divorce and Moving Forward Inspired ‘Hold On’: ‘My Feet Hurt Walking Through All That Concrete’ (Video)

“Thank God she said yes, ’cause I didn’t know who I was going to have to sing this song to next, you or him!” the singer joked with the couple, before launching into her cover of “Make You Feel My Love,” which she released in 2008. “Oh my God, look at her, she’s so in shock!”

You can watch the full proposal here and above.

Naturally, the bride-to-be was in shock, and she thanked her boyfriend for making sure they skipped dinner beforehand. “Thank God you didn’t let me eat, I would’ve thrown up,” she said.

Apparently the engagement had been a long time coming, as the man thanked his fiancée for being patient with him. She noted that she’d been his girlfriend “for so long” as she kept asking him to reassure her it was really happening. 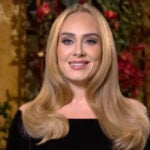 That shock was only compounded when she and her fiancé sat down to watch the rest of the performance. Sitting in the front row, they were sandwiched between Lizzo and Melissa McCarthy, who quickly offered the couple a celebratory drink.

Adele’s “One Night Only” special aired on CBS Sunday night, ahead of the singer’s fourth studio album “30,” which arrives this Friday. Along with her mini concert at the Griffith Observatory, the special also featured a sit-down interview with Oprah Winfrey.