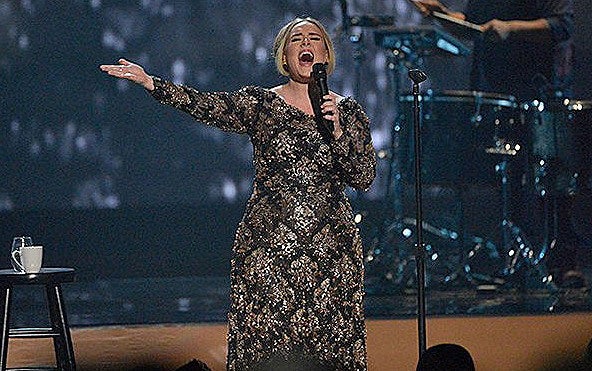 Adele proved to be the queen of Manhattan on Monday when her “Live in New York City” special took social media by storm.

The one-night-only concert marked the British singer’s welcome return to the stage after four years and earned her rave reviews from fans.

Also Read: Adele Says 'Hello' to North American Tour: When and Where to See Her

“WOW.#AdeleLiveInNYC This is TALENT,” one impressed viewer wrote.

“No fancy light display, no dancers, no skimpy outfits … just talent!” tweeted another.

The only complaint seemed to be that the one-hour show wasn’t long enough.

Adele kicked off the night with the blockbuster hit “Hello” from her new “25” album, and went on to warm up the crowd with “Someone Like You,” “All I Ask” and “When We Were Young” — with a few F-bombs and unexpected jokes along the way.

Also Read: ‪How Adele, 'The Wiz' and Dolly Parton Are Turning NBC Into a Family-Event ‬Powerhouse

While the concert ended after “Rolling in the Deep,” the show continued as behind-the-scenes cameras followed Adele backstage and into an elevator, where she sobbed into someone’s arms as the doors closed behind her.

Earlier on Monday, Adele announced dates for her 2016 North American tour, which launches in St. Paul, Minnesota, on July 5 and ends Nov. 15 in Mexico City. The 56-stop tour will be the first time she’s gone on the road since 2011.

“25” sold 3.38 million copies in its first week of sales in the U.S., marking the largest single-week sales figure for an album since Nielsen started tracking point-of-sale purchases back in 1991.

See the tweets and the trailer below.

All I can say after watching the special for the 2nd time is, WOW @Adele WOW. #AdeleLiveInNYC This is TALENT.

#AdeleLiveInNYC should've been 5 hours long. One hour was NOT enough.

"All I ask" has me crying #AdeleLiveInNYC

"I just wanted to comeback and surprise you" #AdeleLiveInNYC pic.twitter.com/hrg5kiDJWp

#AdeleLiveInNYC just here crying because there is no one with more class or elegance than her. I'm completely intrigued. Thank you .@Adele

A performance that will be remembered by generations to come – @Adele Live In NYC. #AdeleLiveInNYC pic.twitter.com/5PgMWjChqm