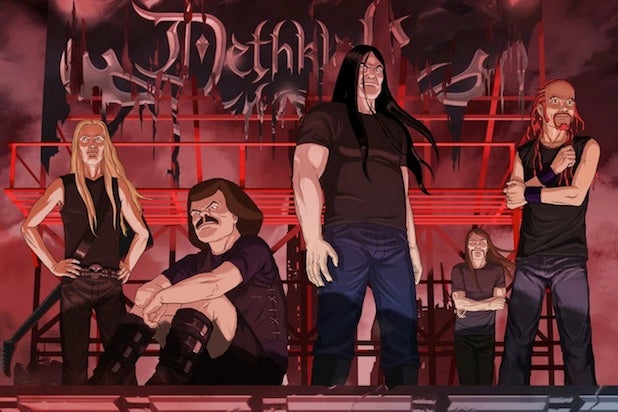 Be warned, Dethklok fans: Adult Swim has heard your cries, and their response is brutal.

For the past two years, Brendon Small has been trying to get his gruesome animated comedy ‘Metalocalypse’ picked up for a fifth and final season. The series ended in a cliffhanger with the 2013 musical special, “The Doomstar Requiem,” which saw the dark prophecies surrounding the wildly popular but incompetent death metal band Dethklok finally come to life. With Charles Offdensen no longer their manager and Murderface corrupted by an evil force, Small had planned to wrap things up with six final episodes, including a series finale called “Army of the Doomstar.”

But after budget negotiations with Adult Swim fell through, Small turned to the fans, starting a petition site called “Metalocalypse Now.” The site encouraged fans to send guitar picks to Hulu urging them to make a deal with Adult Swim to pick up the final season, and even show up at a rally in front of the site’s headquarters in Santa Monica, California. Small even got metal musicians like Devin Townsend and Scott Ian to show their support.

Now Adult Swim, with its typical trolling attitude, has struck back. They have put up a petition form promising to add their signature to the Change.org petition to bring back the show if they get enough signatures. The catch? The form asks for at least 125 words why the show should be brought back and has to be faxed to the network’s offices, with the note that “Adult Swim’s endorsement of this petition  — in no way whatsoever — will bring back ‘Metalocalypse'”. The site has even put up a live stream of their fax machine receiving petitions and throwing them into a bin. The fans have responded by faxing other things instead, like pictures of Nicolas Cage and some NSFW memes.

thanks for all the links to the latest adult swim troll -i replied to someone yester about it but i’m not advertising it. its funny but lame

@JFBenton3 thats their whole schtick with everyone, not just with us. its ok ☻