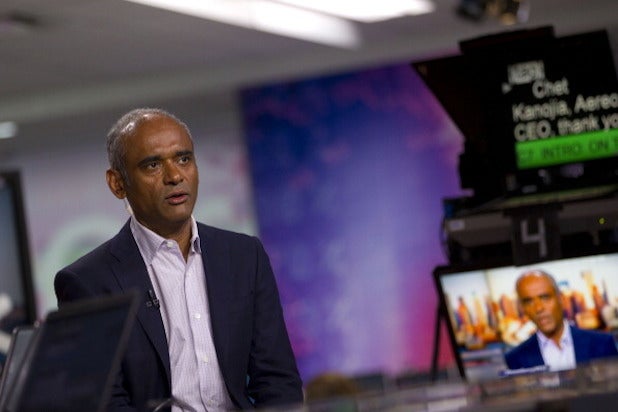 Whatever the Supreme Court decides about Aereo, the company’s CEO hopes it will be truly decisive.

The court will hear arguments Tuesday in the lawsuit between broadcast networks and Aereo, an online company that allows subscribers to watch the major networks on their computers. Aereo uses millions of tiny antennae in the cities it serves — including Boston, Atlanta, and its hometown of New York City — to send broadcasters’ signals to subscribers’ laptops, tablets, and other devices.

The broadcasters say that’s illegal retransmission, and that Aereo is acting like a cable companies without the cables. Cable providers, such as Comcast and Cablevision, pay broadcasters for the right to relay their signals. Aereo doesn’t.

Aereo CEO and Founder Chet Kanojia sat down with TheWrap as the Supreme Court prepares to hear oral arguments Tuesday. A ruling against Aereo could mean the death of the company. But Kanojia says whatever the court decides, he hopes it will be clear-cut. What he doesn’t want is for the Supreme Court to send the case back to lower courts, which would drag out the arguments.

“I am hoping for a clear decision,” he told TheWrap. “If they choose to remand the case, it’s back to the starting point. And it’s another two-year cycle before it gets up there again. I just hope for clarity more than anything else.”

Kanojia talked to TheWrap about what he wishes had happened differently since the company was founded in 2012. The company has been secretive about its number of subscribers, but he told TheWrap it is not yet a million.

TheWrap: If you win in the Supreme Court, do you think your fight will be over?

Chet Kanojia: It’s just a starting point. They will concoct some other theory. They will go to Congress. They will do whatever. They have not shown rational behavior thus far, so I have no expectations. It will be on all fronts.

If the high court sided with broadcasters, are there any alternatives for Aereo besides shutting down? One of your rivals offers other video channels over the web. You could try to negotiate with broadcasters.

People misunderstand who we are and what our mission is. We have been clear from the beginning. The reason for this company is to try opening up this closed system that is controlled by a bunch of monopolies so no new technology can get in front of the consumer unless they decide and they often don’t decide to. They control everything.

How many people will lose service if the Supreme Court rules the wrong way?

We will not discuss subscribers, but it would have immediate impact to a lot of people.

Do you think you could have faced lessened pressure from broadcasters if you had grown more slowly?

Do you wish you had sought a ruling on Aereo’s legality before launching?

You have to put that in context. We won in the district court in New York. We won in the 2nd circuit. … How many tests do we need? We were the winning party coming into this.

Were you surprised at broadcasters’ vociferous opposition to Aereo?

We had gone round and round with these guys for seven months [before launching.] We always expected controversy. It would have been naïve to not expect controversy. But it was disappointing that they didn’t say, ‘Hey let’s sit down and talk.’ It was just ‘Here is a lawsuit’ when we had extended the courtesy to walk their halls and tell them what they are thing.

If you win in the Supreme Court, do you think there is any chance that broadcasters will come back and offer you a license and this will get amicably resolved?

What license and on what basis? Let’s not forget they are putting their content out for free in the public area. That means you are now creating a regime that says they expect to get paid by every technology company that comes in. That has never happened in the history of this country, the history of broadcasting.

We are the techno guys. Our job is to create technology that gets more eyeballs to their content that they monetize through advertising. If they don’t want to be broadcasters any more, don’t be a broadcaster. But I’m not going to invent some regime of taxation.

You’ve warned the future of cloud computing is at stake in the case because broadcasters are challenging of part of your system that allows subscribers to store programs for later playback. Can you explain that?

The issue before the court is the transmit clause and copyright law and what is a public performance. The statute affects all transmissions. There is no ‘Aereo provision.’ If we aren’t allowed to provide technology for viewers to store files on the cloud and later stream it back, other technologies like those in iTunes could be affected. According to broadcasters’ interpretation, if I transmit a song to myself, it is effectively a public performance. [If they win] that applies across the board. It has pretty significant impact.