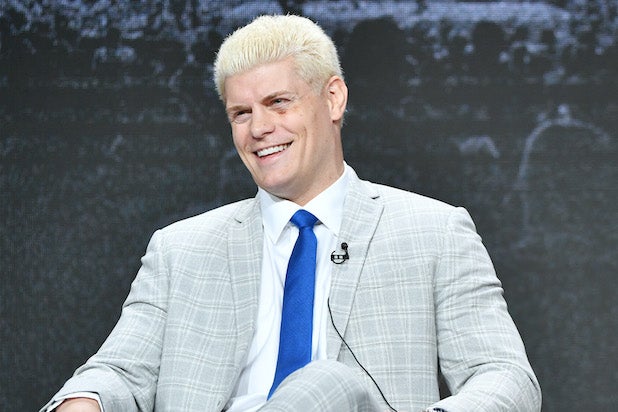 AEW wrestler, co-founder and executive vice president Cody Rhodes lost his “Rhodes” for legal reasons when he left WWE. “The American Nightmare” has the rights back now but still won’t use his family’s adopted surname in the ring or on wrestling TV, he said on Thursday.

On other television shows, however, it’s a different story.

“I’m very happy about being Cody Rhodes again. The details of it all aren’t important other than it was a very positive, no-hard-feelings-on-either-side type scenario,” Cody said. “I will say though, it’s not something I probably will use in the wrestling space.”

“I’ve gotten very used to ‘The American Nightmare’ Cody. I like how Justin Roberts says it. I just like it. I’ve liked it for some time,” he continued. “Where I’m most excited about ‘Cody Rhodes’ being available again is when it comes to third-party ventures and things like ‘Go-Big Show,’ that I just took part in, the show I was part of that’s coming to TBS, other projects like that, only because in our wrestling bubble that we’re all in — we’re all family and a part of, all of us — everyone kind of knows the saga of ‘Cody Rhodes.’ When you dip your toes into different waters in other worlds, they may not understand and they don’t need that preexisting equity or baggage. So it will be nice to finally tell them what they can credit on the screen and where the SAG credits can go, things of that nature.”

When Cody split from WWE, WWE kept the “Cody Rhodes” trademark, which is a typical business move by the behemoth. Vince McMahon’s publicly traded pro-wrestling corporation surrendered the moniker back to Runnels this week.

Runnels launched a competitor to WWE, All Elite Wrestling, in 2019. A weekly AEW show, “Dynamite,” airs on TNT against WWE’s “NXT” on USA Network.

TNT Champion Cody held the conference call ahead of Saturday pay-per-view, “Full Gear,” which is All Elite Wrestling’s final PPV of 2020.

“AEW Full Gear “will air live on pay-per-view Saturday, Nov. 7 at 8/7c from the Daily’s Place & TIAA Bank Field in Jacksonville, Florida. The event will stream live on BR Live in the United States and on FITE internationally.

Here is the rest of the card:

Chris Jericho vs. MJF (with Wardlow) – If MJF wins, he is allowed to join The Inner Circle