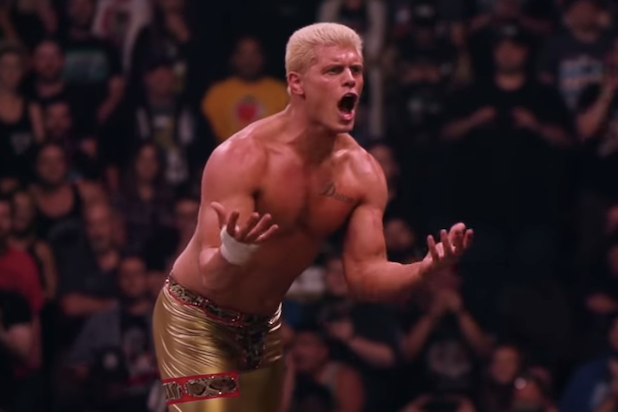 Professional wrestling fans can’t seem to get enough content these days, and Turner and AEW are more than happy to feed the beast.

Brett Weitz, the general manager of TNT, TBS and truTV, told TheWrap that his company and All Elite Wrestling are “talking about” doing a studio show together. That would be in addition to their two-hour weekly partnership for wrestling series “Dynamite,” which launches next Wednesday.

“We are talking about it,” Weitz said when we specifically asked if there could be “a possible studio show as a companion [series]” for “Dynamite.” “I don’t know if you’ve met Tony Khan, but he’s not short of ideas — or passion,” he continued. “So there is a world where we’re thinking about ‘Where does something like that live?’ Knowing full well that within the WarnerMedia ecosystem we have B/R Live, we’ve got all these different components at our disposal.”

So would we. And so might a curious WWE, which in April announced it would be launching a studio show on Fox Sports’ FS1 this fall. The Tuesday night cable series will serve as a companion show — of sorts — for Fox broadcast network’s new jewel, “Friday Night SmackDown,” which launches next Friday.

We are still awaiting a launch date, title and talent for WWE’s FS1 studio show. According to website The Big Lead, the Fox Sports 1 show has the working title “WWE Backstage” and is slotted for a Nov. 5 launch. That gives AEW and TNT about a month to beat it to market.

Such payback would probably feel pretty sweet after WWE moved its minor-league wrestling series “NXT” to TNT competitor USA Network, occupying the same exact time slot that All Elite Wrestling had previously announced for its then-untitled “Dynamite.” WWE rushed “NXT” (which had been a Wednesday show airing in the same time slot on WWE Network) to cable two weeks ahead of AEW’s debut, technically planting its flag on linear TV first.

TheWrap attempted to reach WWE and Fox Sports reps for comment on The Big Lead’s story, but we did not immediately hear back.

Others have reported AEW’s desire to add a third hour of programming on Turner platforms. Earlier this month, All Elite Wrestling co-founder and star wrestler Cody Rhodes told IGN that they were considering a third hour of content, though most wrestling blogs and fans took his comments to mean the extra time would be more in-ring action.

“It may not happen on October 2, which is what we’re all kind of gunning towards, but it wouldn’t surprise me if it was something that [launched] shortly thereafter,” Weitz said of the potential companion series. “We’re thinking about it for sure.”

Wednesday, Oct. 2 is the launch date of TNT’s weekly two-hour wrestling series, “All Elite Wrestling: Dynamite,” which will air from 8/7c to 10/9c. It will go head-to-head with WWE’s “NXT” on USA.