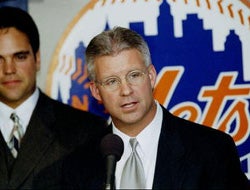 ESPN has suspended Steve Phillips, a baseball analyst and former general manager of the New York Mets, after an affair he had with a 22-year-old production assistant – and its messy aftermath — was exposed by the New York Post.

“We were aware of this and have already taken appropriate action,” ESPN said in a statement. “We have no further comment.”

The duration of Phillips’ suspension is at a least week, a source at the network said.

Phillips, 46, told police in Wilton, Connecticut that he had an affair with the woman, Brooke Hundley, who he said became enraged when he ended the relationship this summer. "I have extreme concerns about the health and safety of my kids and myself," he said in a statement to police.

Phillips’ wife said Hundley threatened her repeatedly, via voicemails, text messages and this letter. (The wife has filed for divorce.)

If you’re into this sort of thing, this (and this and this) are required, salacious reading.

This isn’t the first time ESPN has faced a sex-related scandal involving its on-air talent. In 2006, Harold Reynolds, another baseball analyst, was fired for alleged sexual harassment of a female employee. (Reynolds maintained his innocence, saying, "I gave a woman a hug and I felt like it was misinterpreted"; he filed a wrongful termination suit against the network, which was settled last year.)

Reynolds is now an analyst for the MLB Network.