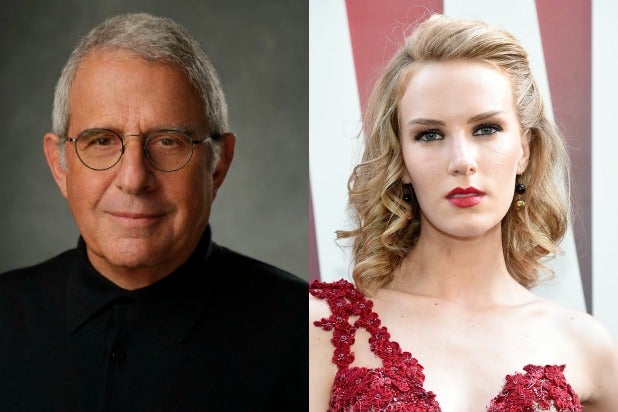 Actress Charlotte Kirk is the unnamed woman whose affair with Ron Meyer eight years ago led to his abrupt resignation as NBCUniversal vice chariman on Tuesday, multiple individuals with knowledge of the situation told TheWrap.

Meyer had reached a financial settlement with Kirk for an undisclosed an amount, but an insider told TheWrap that a third party was trying to extort Meyer and force him to disclose the settlement to NBCUniversal. Meyer and NBCUniversal declined to comment, while a representative for Kirk did not immediately respond to TheWrap’s request for comment.

Kirk is the same actress whose later affair with Kevin Tsujihara between 2013 and 2014 led to his own ouster as Warner Bros. CEO last year after word of the relationship and Tsujihara’s subsequent efforts to advance Kirk’s acting career surfaced in the press.

“Late last week, Ron Meyer informed NBCUniversal that he had acted in a manner which we believe is not consistent with our company policies or values,” NBCU CEO Jeff Shell told employees on Tuesday. “Based on Ron’s disclosure of these actions, we have mutually concluded that Ron should leave the company, effective immediately. We thank Ron for his 25 years of service, and for his significant contributions to NBCUniversal.”

Meyer’s departure abruptly ends a more than two-decade tenure with the company, most of which came as president and COO of Universal Studios, which he ran from 1995 until 2013. He had been Vice Chairman of NBCU for the last seven years. Meyer is known as one of the founders of powerhouse talent agency CAA.

“It is with a heavy heart that I announce my departure from NBCUniversal. I recently disclosed to my family and the company that I made a settlement, under threat, with a woman outside the company who had made false accusations against me. Admittedly, this is a woman I had a very brief and consensual affair with many years ago,” Meyer said in a statement of his own. “I made this disclosure because other parties learned of the settlement and have continuously attempted to extort me into paying them money or else they intended to falsely implicate NBCUniversal, which had nothing to do with this matter, and to publish false allegations about me. After I disclosed this matter to the company, we mutually decided that I should step down from my role as Vice Chairman of NBCUniversal. I’ve spent 25 years helping to grow and support an incredible company in a job I love. It is the people at this company that I will miss the most. I regret what has happened and I am sorry for all the people in my life I may have let down, especially and most importantly, my family.”

Meyer, who is 75, was married to Kelly Chapman Meyer for 25 years, from 1993 until their divorce in 2018. He has four children, two from that marriage and two from an earlier marriage to Ellen Meyer.

In March of 2019, text messages between Tsujihara and Kirk were revealed and indicated a sexual relationship between the two, and that she asked him to help with her career. Warner Bros., which had already investigated the matter in 2017 — including whether or not she unfairly got roles in films because of the relationship — investigated it further. Tsujihara stepped down in what was described as a joint decision between him and then-WarnerMedia CEO John Stankey. He was replaced by Ann Sarnoff.