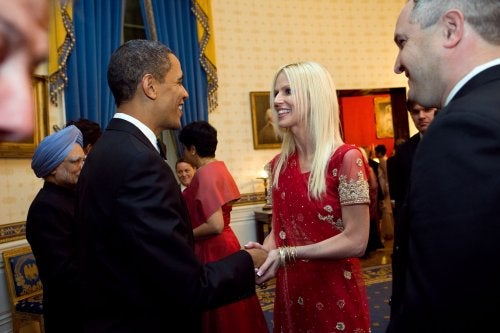 Fingers have been pointing in many directions since a White House state dinner was crashed last week by Tareq and Michaele Salahi, a Virginia couple who’d hoped to appear on “Real Housewives of DC.”

“This is not the time for political games,” warned Mississippi Congressman Bennie Thompson, “or scapegoating to distract our attention from the careful oversight we must apply to the Secret Service and its mission.”
In other words, “Prepare the witch hunt!” (ACORN anyone?) Below are some candidates currently being floated for blame in the media and blogosphere.
1. Blame Magnet: U.S. Secret Service. Its agents were directly responsible for physically checking guests to ensure they were legitimate invitees. Yet SS members never punched “Salahi” into their computers and waved them on to the Blue Room.
Worst Case Scenario Claim: According to NY Congressman Peter King, the Salahis could have been martial arts experts or gone for the sharp silverware.
(Source: LA Times)
2. Blame Magnet: White House Social Secretary Desirée Rogers. Earlier this year she had canned Cathy Hargraves, whose role was precisely to vet arriving guests by checking them off against invitation lists. Worse, Rogers didn’t attend the state dinner in her job capacity, but participated in it as a party guest.
Worst Case Scenario Claim: Salahis could land roles on “Real Housewives of DC.” (Sources: NY Times, Newsweek, Daily Beast)
3. Blame Magnet: Rashid Khalid. Tareq Salahi knows the pro-Palestinian professor who once shook the hand of Barack Obama, who once sat in a room with Bill Ayres, who once was a Weatherman.
Worst Case Scenario Claim: Destruction of Israel.
(Source: World Net Daily)
4. Blame Magnet: Michele Jones. The former career soldier, now a special Pentagon assistant to SecDef Robert Gates, lists the Salahis’ lawyer as a friend on her Facebook page. Salahi apologists claim Jones sent signals to the couple that led them to believe they were on the guest list.
Worst Case Scenario Claim: There may be sleeper cells of Salahis ready to crash other Washington social events when given the word.
(Source: Washington Post)
5. Blame Magnet: Arun K. Singh. India’s U.S. ambassador, Singh is reportedly a fellow polo enthusiast and friend of Tareq Salahi, who founded an American polo organization. Singh allegedly got the Salahis into the dinner event after they had initially been rebuffed outside the White House.
Worst Case Scenario: Obama plot to replace football with polo.
(Source: Gawker)
x
Looks like you're enjoying reading