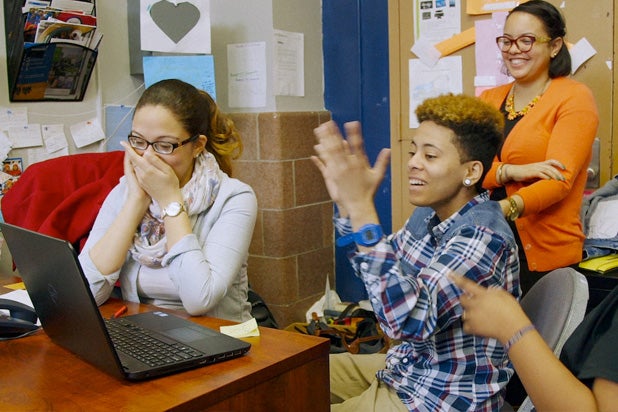 This year’s summer version of AFI Docs certainly lived up to its slogan, “You cannot make this stuff up,” with the selection of 92 features and shorts. Audiences witnessed poignant, contemporary and historical tales in the restored AFI Theatre in Silver Spring, Md., as well as downtown Washington, D.C., theaters from the Newseum to the National Archives.

The 2018 Audience Award for Best Feature was awarded to Melissa Haizlip and Sam Pollard’s engaging “Mr. Soul!” Capturing the hotbed issues of the late 1960s, the film focuses on the Ellis Haizlip, who hosted a groundbreaking PBS show that focused African American issues and leaders in politics and the arts. The engaging panel included the filmmakers, Chaz Ebert and poet Nikki Giovanni. This year’s Audience Award for Best Short went to “EARTHRISE,” directed by Emmanuel Vaughan-Lee.

The opening night film, the inspiring “Personal Statement,”  by directors Julianne Dressner and co-director Edwin Martinez, captured the need for more guidance counselors in today’s public schools and how lower-income high school students aiming for colleges can fill the gap by helping their fellow students.

World War II is depicted in two compelling documentaries. Erik Nelson’s inspiring “The Cold Blue,” featuring the footage William Wyler took of B-17 pilots and their lives, celebrates the bravery of the young American flyers.

“The Silence of Others” by Almudena Carracedo and Robert Bahar, explores the unresolved issues of justice for those who were victims of torture or lost family members in General Franco’s fascist Spain.

Nathaniel Kahn provides an insightful questioning of the value of art today, especially in the high-end market, in “The Price of Everything.” Interviewing a wide spectrum of artists and gallery owners, Kahn shows how collecting art has become an investment game.

Taking advantage of being in the nation’s capital, lawmakers like House Democratic Whip Steny Hoyer (D-Md.), and Rep. Donald Beyer (D-Va.) spoke at screenings. This year’s annual Charles Guggenheim Symposium honoree was Steve James, who discussed his approaches and showed an episode from a series, “America to Me,” about a racially and economically diverse Chicago high school.

Rory Kennedy’s “Above and Beyond: Nasa’s Journey” and Barbara Kopple’s “A Murder in Mansfield” were the standouts of works by accomplished female filmmakers. Lisa D’Apolito’s “Love, Gilda” entertains with delightful “Saturday Night Live” clips of the talented comedian’s career intercut with her personal writings. The film’s mood changes with the heart-wrenching story of her life threatning illness.

Since the movies were scheduled at theaters miles apart, it’s just impossible to see them all. Luckily, most of these gems will be opening up in commercial movie theaters or airing on television.