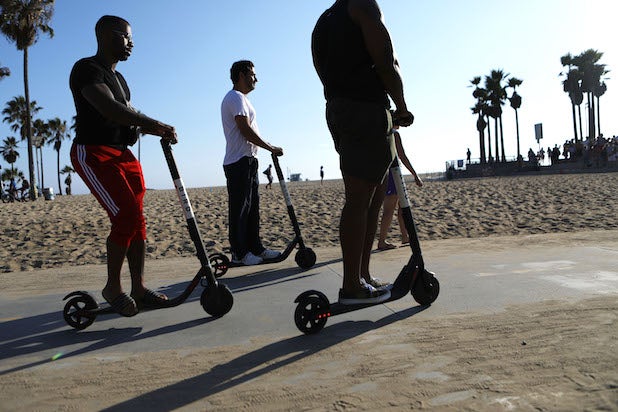 Grayson Kubow embarked on his first flight on Thursday. He wasn’t boarding a plane, however, he was in Westwood, California, riding a Bird.

If you live in or around Los Angeles and have spent more than 30 seconds outside in the last six months, chances are you’ve encountered one of these electronic scooters, either littering the sidewalk or nearly swiping you as they whizz by.

During his inaugural ride, when 18-year-old Kubow was asked by TheWrap whether he thought Birds could be a viable mode of transportation, he shook his head and said: “I think it’s going to get banned.” And he may be right.

Originating from the company headquarters in nearby Santa Monica, Birds have quite literally swarmed the streets in Hitchcock-like fashion, outnumbering any other type of city critter since they launched September 2017. In May, Limes were introduced, a new breed of dockless electric scooter with the same fare and similar speeds (up to 15 m.p.h.). Though the company is headquartered in San Francisco, the first batch of Limes were launched at the University of North Carolina at Greensboro.

Not all L.A.-area communities have prohibited scooter operations, but the cities of West Hollywood and Beverly Hills have imposed at least a temporary ban. In a July 24 press release, the Beverly Hills City Council called for a “zero-tolerance” policy during their six month ban, citing a “concern for public safety and a lack of any advanced planning and outreach by the motorized scooter companies.”

And back in Santa Monica — the Bird’s nest, so to speak — things are looking a little rocky.

The Santa Monica City Council has recently launched a Shared Mobility Pilot Program that would allow two e-scooter companies and two e-bike companies to operate within the city. If neither Bird nor Lime are selected as Mobility partners, they will not be permitted to operate in Santa Monica, the city where Bird launched its incipient fleets.

On Aug. 10, a committee chosen to implement the program endorsed two other companies, JUMP (owned by Uber) and Lyft, for both e-scooters and bikes — their recommendation was not the final selection, which will be decided Aug. 30.

Bird and Lime responded to the endorsement by deactivating their scooters in Santa Monica for one day earlier this month, protesting the city’s limiting of dockless vehicles. Lime CEO Toby Sun said in a statement that the company is “disappointed by the City’s current proposal because Santa Monica riders deserve access to best-in-class technology.”

A Bird spokesperson said in an email to TheWrap that “the Lyft and Uber applications to operate e-scooter sharing programs in Santa Monica demonstrate the desperate lengths CO2 polluting companies will go to for the purpose of undermining clean energy competition.”

Also Read: Samantha Bee on Her One Regret About Calling Ivanka Trump That Word

But like any other invasive species, Birds have migrated to new lands. They’ve been spotted in San Francisco, as well as far east as Indianapolis. And with ominous headlines like “Bird plans Indy return with nearly 10 times as many scooters,” it’s easy to assume many people see them as a potential menace.

However, there are some places the scooters haven’t reached. Kubow and fellow first-time Bird rider Leo Cyker are from Chicago and Boston, respectively, and were in Westwood for their freshman orientation at UCLA. They both have never seen Birds in their hometowns and described their first experience riding them as “pretty easy,” but acknowledged problems associated with the scooters, such as a lack of helmet protection and overcrowding.

“If you already look at the sidewalks in Venice, it’s terrible,” Cyker said.

Kubow noted that technically riders are supposed to follow helmet laws (a rule stated on the Bird app), “but how many people do you see riding them with helmets?” Cyker responded. The answer is very few.

Rider Nathan Long occasionally charges the batteries powering Birds, aptly named “Bird hunting,” turning a profit of $20 per scooter. He said he’s only familiar with Bird and Lime scooters, and has not heard of JUMP or Lyft scooters. Although Long likes the idea of electric scooters, he understands the complaints against them, especially from others who occupy the road.

“People who ride them don’t follow any traffic laws, because it’s not really clear whether you’re a pedestrian or a vehicle … which makes it difficult for people who drive,” he said.

Sam Dreiman, Director of Strategic Development for Lime, responded to safety concerns in a statement emailed to TheWrap:

“Lime is committed to safety in all of our operations,” he wrote. “We are working closely with the City of Santa Monica to educate our riders about wearing helmets, not riding on sidewalks, parking properly and not riding in prohibited areas like the beach path.”

Long said if the scooters were hypothetically to be banned in all of L.A., he “wouldn’t be heartbroken, but it’s fun having them around,” he said, adding, “It’s kind of a cultural thing at this point.”