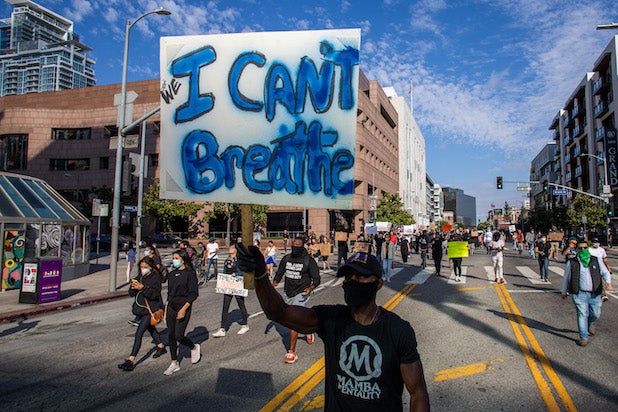 As the storm clouds of national anger began to gather late last week my youngest son — the one who is totally apolitical, who has never shown the slightest interest in current affairs or activism — sent the family a text.

“I’m quite disturbed by the event that occurred in Minneapolis, the killing of George Floyd,” he wrote, “yet another innocent African American. It just seems to be a never-ending cycle of racism and police brutality, over and over…. I usually just acknowledge these heinous acts for what they are and I don’t think that there’s anything I can do to change it, but after seeing this video I think it is important to take some sort of action.”

The desire to act by this apolitical, white 22-year-old man in Los Angeles is what we’re seeing around the country this weekend, an explosion of emotion that has devolved in some places into violence, but that has mainly been the reflection of a mass cry of anguish across this country: Enough already. Enough persecution of our black fellow citizens. Enough of our failure to end systemic racism in our country. Enough.

All colors and creeds are rising up in a collective disgust and outrage, fueled — of course — by three months of mass death and miserable mismanagement of a pandemic. On social media I saw Amish people holding signs of protest this weekend. In Los Angeles, we saw Native Americans dancing their indignation in the streets.

Companies and CEOs are standing up to be counted and saying: We support our black colleagues, our black neighbors. We stand with the black community.

Black lives matter. We stand with those using their voices and peacefully calling for justice, fairness and racial equality.

Isn’t it interesting how the wave of national fury doesn’t strike any of us as strange? How the killing of a totally unknown African-American man on a Minnesota street was not regarded anywhere as an isolated incident of cruelty (or an accident) by one overzealous cop but was instead seen as the latest manifestation of a national crisis?

Everyone recognized this video for exactly what it was: an all-too-familiar scene of brutality inflicted on a person of color. Coming on the heels of the horrific video of Ahmaud Arbery gunned down while he jogged on a street in Brunswick, Georgia, the explosion was exactly in line with decades of justice denied.

If you are black, this moment in the nation’s history is seared with the scars of decades lived without the promised change. The depth of this one man’s pain says it eloquently: “Why does this keep happening?”

We have learned the history and watched the tape over and over. Our entertainment community has held this mirror up to the country, with eloquence. Ava DuVernay showed us the continuum of black persecution in this country with her 2016 documentary “13th” about mass incarceration, and again with her dramatic depiction of unjust conviction in last year’s “When They See Us.”

We thought April was the cruelest month. But week after week we see our nation descending into ever worse low points.

For those who believe this is a tipping point, I will remind them that tipping points are seen in hindsight, not in real time. To tip is to sacrifice and lean into the hardship, because what’s at stake is worth it. The stakes before us are clear: the fate of our democracy. Our character as Americans. The price we are willing to pay to be the nation we aspire to be.

For the record: A previous version of this story incorrectly identified the location of Ahmaud Arbery’s shooting death.