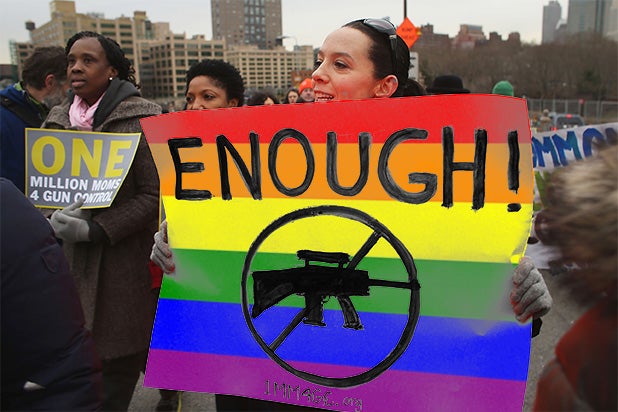 The mass killing in Orlando has given the anti-gun movement a powerful new ally: gays.

Garcia was one of many gay leaders who signed an open letter this week calling for a renewed commitment to the fight for stricter gun laws. Organizers managed to get representatives of 122 LGBT centers — which together serve 2.2 million people — to sign the letter in less than 24 hours.

“More than ever we must raise our voices and be heard,” the letter read. “We as the community of LGBT centers call for our communities, our allies, and our friends to demand action to hold our elected officials accountable for passing laws that limit access to assault weapons.”

The killing of 49 people at an Orlando gay nightclub has mobilized the gay community against gun violence — giving the anti-gun movement, which stalled in its fight with the National Rifle Association, an infusion of new blood.

The question now is whether LGBT activists will be able to re-create the incredible success they had fighting for gay marriage.

“Yes, the NRA should be worried,” UCLA law professor and author of “Gunfight: The Battle over the Right to Bear Arms in America,” Adam Winkler told theWrap. “The gay community is politically active and politically engaged. They’ve proven successful in changing policy.”

Dr. Scout, director at CenterLink, an association of the country’s leading LGBT centers, said the new alliance between anti-gun and gay activists “could be a watershed moment in this fight.”

“A lot of us have been involved in gun control in the past but now it’s a primary point in the agenda of our joint leadership,” said Scout, who is transgender and no longer uses a first name.

In less than five decades, the gay community has been able to accomplish what few others minority groups have. The 1969 Stonewall riots spawned the gay liberation movement, and ACT UP — the AIDS Coalition To Unleash Power — helped force recognition of the AIDS crisis.

Gays achieved their greatest victory with the legalization of gay marriage last year — something that once seemed as unlikely as new gun control legislation.

Now the gay community is offering its vast infrastructure and know-how to the gun control advocates.

The Daily Beast Tuesday, actor and gay activis“if there is one group in this country with more will, more experience, and more tenacity than the NRA, it is the LGBT community.”

The L.A. LGBT Center has already added gun safety to its weekly policy agenda. The center has also reached out to the Brady Campaign to Prevent Gun Violence, California’s Lt. Governor Gavin Newsom (who’s pushing an initiative to strengthen California gun laws in the state) and Everytown For Gun Safety, a group formed after 2012 Sandy Hook Elementary shooting that claimed 26 lives.

“Gun control activists have made some important inroads on the local and state levels but they’ve lost badly on the national stage,” AIDS activist Peter Staley, who was featured in the 2012 Oscar nominated film “How to Survive a Plague,” told TheWrap. “This is a whole new ball of wax.”

“Who would have imagined a week ago that the NRA’s biggest threat would be the gay community?” Staley added. “The NRA should be very worried.”

“The marriage equality movement was extremely effective,” Everytown deputy press secretary Taylor Maxwell told TheWrap. “We modeled in part our success after it. There is a lot to learn from the gay community.”

“This community has exceptional organizing skills,” Wayne McNeil, a gay Everytown volunteer and gun violence survivor, told TheWrap. “They know how to mobilize themselves around an issue and find creative ways to solve problems.”

The Sandy Hook shooting renewed the debate about gun control, and invigorated the fight for universal background checks and assault weapon bans. But the movement suffered a crushing defeat when every major proposal President Obama championed fell apart on the Senate floor in April of 2013, four months after the tragedy. And just one day after the 2015 San Bernadino shooting, 54 senators, almost all Republican, rejected a bill to block suspected terrorists from legally buying guns.

The new partnership between the gay community and gun safety advocates comes as Democrats try to revive their push for gun control legislation following the Orlando massacre. On Wednesday, Connecticut Sen. Chris Murphy waged a filibuster into the night to force a vote on gun control legislation. Presumptive GOP nominee Donald Trump also weighed in on the debate, signaling he’d be open to new restrictions that would ban people on the no-fly list from buying guns.

Gay activists say they’re already planning their next step, warning that underestimating a group that has had to fight its entire existence would be ill-advised.

“You should never ignore the LGBT people,” said Dr. Scout. “We have these legislators on speed dial.”