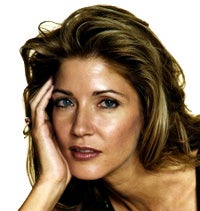 Candace Bushnell knows this. Her post-“Sex” best-seller, “Lipstick Jungle,” became an NBC series. It lasted less than a year before NBC pulled the plug. (The show, for the most part, never came close to recapturing the 7 million viewers who watched the pilot.)

But now Bushnell is taking her “Sex” sensibility online. The author announced a partnership this week with the Meredith 360 — the interactive marketing arm of Meredith Corp., the publisher of More magazine — to produce “The Broadroom,” a web-only series starring Jennie Garth, Jennifer Esposito and Talia Balsam (“Mad Men”) and sponsored by Maybelline.

The series, currently in production in New York, will consist of four webisodes written by Bushnell and directed by Ellen Gittelsohn of “Roseanne," “Designing Women” and “Fresh Prince of Bel-Air” fame.

It is scheduled to debut in September on Maybelline’s website.

Maybelline is apparently using the occasion to launch their newest lipcolor, “Color
Sensational.”

Deborah Marquardt, whose job title is “VP of Integrated Marketing Communications,” said Bushnell “is the perfect match for this campaign and this web series as her work celebrates the colorful lives women lead at all ages and in a million different ways.”

No doubt there is a big future in web-specific series — especially as the lines between PC, TV and mobile get blurrier. And given the recognizable talent involved in this one, there’s obviously some money here.

But they’ve got to a long way before they’re considered less of a marketing ploy and something that’s worthy of an IMDB profile.