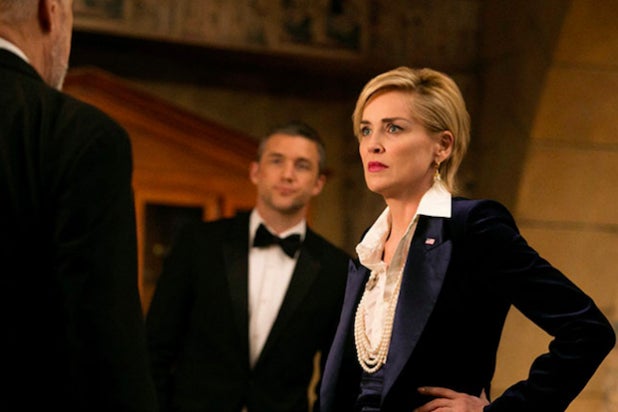 Rare is the action series that seeks to answer a genuinely good question. For instance, why does the Vice President seem to have no real job? TNT’s new action drama “Agent X” offers one possible answer: The VP’s real job is to do the government’s dirtiest work in secret so that the president can enjoy some plausible deniability.

It’s a clever idea, but as if desperately in need of a sort of viewer insurance policy, “Agent X” is structured a bit like your average case-of-the-week serial, replete with long shoot-out scenes, hostage scenarios and some flirty repartee between two hot assassins trying to kill each other. The show doesn’t cover new ground, but it gets a passing grade for being competent within the overly familiar territory of the spy genre.

Sharon Stone stars as the newly-elected Vice President Natalie Maccabee, all Kate Gosselin hair and Meredith Viera wardrobe as she retires to her vice presidential home on the night of her inauguration. Only then does she learn that all that weird Freemason stuff on the History Channel is real and she’s in charge of handling the decision-making that’s too unsavory for public consumption.

It’s not the FBI or the CIA but the VP who decides if a kidnapped senator’s daughter is worth saving, who makes the call to dispatch that network of international criminals (who are in the first episode Russians, obvs). She’s reviewing security footage from a secret Batcave in the basement of her house. Maccabee is introduced to her new duties by her seemingly omniscient butler named Malcolm, the Alfred to her Bruce Wayne, as played by Gerald McRaney.

Then there’s Agent X himself, whose governmental role was written into a secret part of the constitution that only the Vice President and a few others are privy to: “An agent of unknown identity is hereby authorized to serve at the discretion of the Vice President for the purpose of aiding the republic at times of dire peril,” reads VP Maccabee in some stodgy exposition.

As Agent X, Jeff Hephner plays the James Bond wannabe with as much charm as one could muster for such a by-the-numbers role. Fellow assassin and Russian contortionist Olga Petrovka (Olga Fonda) remarks that he’s not like all the other secret agents she knows. He’s different. He has heart. Just like the hero in nearly every other spy drama ever.

But with enough of the familiar genre trappings to make us comfortable, “Agent X” isn’t the dull affair it could be. With a few injections of much-needed humor, nimble hand-to-hand combat scenes (including one delightful nail-biter of a scene in which two spies square off while balancing on scaffolding pipes), and a few clever plot twists, the show isn’t lazy. It’s like a tasty frozen pizza: decent for what it is.