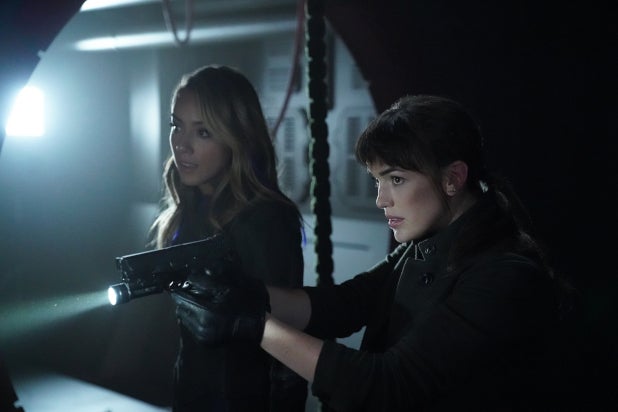 (Spoiler warning: Please skip if you don’t want to know details about “Avengers: Endgame” and how it connects to “Agents of S.H.I.E.L.D.”)

The universe-changing events of “Avengers: Endgame” will probably be referenced on “Agents of S.H.I.E.L.D” at some point — just not during the ABC drama’s sixth season, which premieres next Friday.

The last few episodes of Season 5 referenced the coming of Thanos (Josh Brolin) and the events depicted in “Infinity War,” but the small-screen storyline ended before the Mad Titan’s big-screen battle with the Avengers. And since the sixth season jumps ahead one year, that would mean that “S.H.I.E.L.D.” would take place within that depressing five-year span when the half the universe’s population disappeared, right?

Except, at least at the outset, Season 6 takes place before the snap-heard-round-the-universe. And if you’re confused by that, Marvel TV has a very good reason for it. The company didn’t really know how “Endgame” was going to play out while “S.H.I.E.L.D” was shooting, or even when the new episodes would air.

“It’s just the safest way for us to do things,” Marvel TV chief Jeph Loeb told reporters on Friday. “Just looking at it from a very practical place, which is, what the world looked like post-snap, [it] was not something we had seen yet. We were already shooting.”

Additionally, Loeb didn’t want to burden “S.H.I.E.L.D.” with depicting what a post-“Endgame” MCU looks like, with “Spider-Man: Far From Home” coming up in a few months.

“We don’t want to ever do something in our show which contradicts what’s happening in the movies. The movies are the lead dog. They’re setting the timeline for the MCU and what’s going on. Our job is to navigate within that world,” he said. “The only way for us to tell our story is to do them pre-snap. Whether or not you can figure out [how the timeline works], we’ll let ‘timelords’ figure out.”

Co-showrunner Jed Whedon added that although they knew “a fair amount” of “Endgame’s” plot, “S.H.I.E.L.D.’s” air-date wasn’t set in stone when they were shooting. “If they moved us up by two months and we based our show on [‘Endgame’s’] storyline, then all of a sudden we’d burn down a huge story point for them,” he said. “So we had to dodge all of that.”

Whedon added that they pretty much assumed “S.H.I.E.L.D.” wasn’t coming back until after audiences had seen “Endgame,” but Loeb said that ABC did approach them at least briefly about moving their season up a few months. That was quickly rebuffed, for fear of having “Endgame” happen right in the middle of their season.

But they’re aware that, at least time-wise, the logic doesn’t quite hold up, considering the fifth season ended at the same time “Infinity War” was happening. And, to make matters even more complicated, it’s possible there could be some Multiverse stuff in place too. After all, the fifth season catapulted the show some 90 years into the future, then sent them back to the present in an effort to alter the course of history. So it’s possible the timeline changed into one that wasn’t among the 14 million possible futures that Dr. Strange saw.

They’d rather you just go with it. “We have a logic in our head that makes sense, but we certainly don’t want to burden the audience of telling them all that,” Whedon said. “We just want them to enjoy the ride and let the couch discussions be about that.”

So while there are practical reasons for “S.H.I.E.L.D.” avoiding “Endgame” when it returns next week, Loeb said its mostly so the writers can do the show they want without having to be too shackled too much to the universe-changing events from the films. “Someone will figure it out. For us, it really just comes from a place of just enjoy the show.”