“America’s Got Talent” debuted its 16th season Tuesday on NBC with several amazing auditions, including a showstopping cover of Celine Dion’s “All By Myself” performed by a 10-year-old boy who was born in Abu Dhabi and is growing up in the Philippines. The young singer, named Peter Rosalita, even managed to give judge Simon Cowell “goosebumps” with his rendition.

During his performance, which you can watch via the video above, you’ll see Peter give judges Cowell, Heidi Klum, Sofia Vergara and Howie Mandel his all while singing “All By Myself” in a way that would probably impress even Dion herself.

When he concluded his final note, he received a standing ovation from Cowell, Klum, Vergara, Mandel and the studio audience. 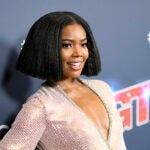 Howie told Peter he’s “so cute” and predicted he will “go far in this competition.” Sofia wanted to know if he’s surprised by the amazing power of his own voice, to which he said yes, and he was “so nervous.” Heidi told Peter she was worried a glass would break due to how high his voice can go: “I mean, Mariah [Carey] better watch out.”

“That was an incredible audition,” Simon added. “There were parts during that audition which literally gave me goosebumps. You have an amazing voice, an amazing personality, an amazing energy. Everyone is going to fall in love with you after this audition.”

Then it was time for the panelists to vote, and, of course, they each gave Peter a big “Yes!”

With this only being the first episode of the “AGT” season, Peter still has a long way to go — and he didn’t receive the night’s Golden Buzzer, which went to the Northwell Health Nurse Choir — but if he wins “AGT” Season 16, Peter says he will buy a Nintendo Switch and a laptop for his online schooling. We know, adorable.