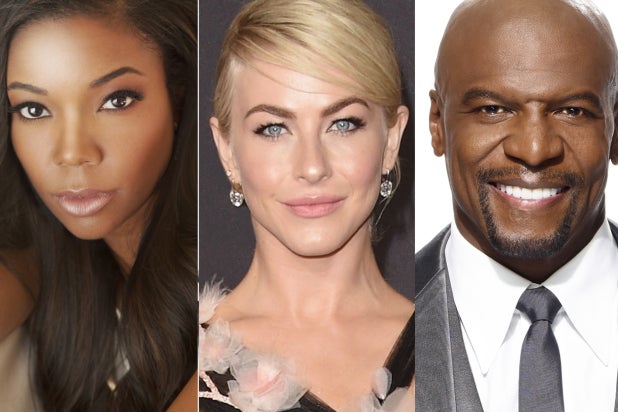 “America’s Got Talent” is going through a shakeup for its 14th season, with Terry Crews taking over as host from Tyra Banks.

In addition, Gabrielle Union and Julianne Hough will join the judges’ table, alongside the returning Simon Cowell and Howie Mandel. Mel B and Heidi Klum will not return.

NBC is keeping Crews busy. Along with hosting the “Champions” edition of “AGT,” Crews stars on the sixth season of “Brooklyn Nine-Nine.” Banks had hosted “AGT” for the last two seasons after longtime host Nick Cannon left.

“One of the many secrets to the success and longevity of ‘America’s Got Talent’ is its fearless drive to reinvent itself,” said Meredith Ahr, president, Alternative and Reality Group, NBC Entertainment. “The next evolution of the format brings in fresh expert eyes to join Simon and Howie on the panel. Gabrielle and Julianne are two of the most aspirational women in the business, on top of being electric entertainers with talent across disciplines. I am excited to see how their knowledge, compassion and sheer joy enhance the experience for acts and viewers alike.”

Hough is no stranger to sitting on a judges’ panel, having served in the role for ABC’s “Dancing With the Stars.” Union is currently executive producing and starring in the “Bad Boys” spinoff, “LA’s Finest” on Charter’s Spectrum network that will debut May 13.

“America’s Got Talent” was created by Cowell and is co-produced by Fremantle and Syco Entertainment. Cowell, Sam Donnelly, Jason Raff, Trish Kinane, and Richard Wallace are the executive producers.