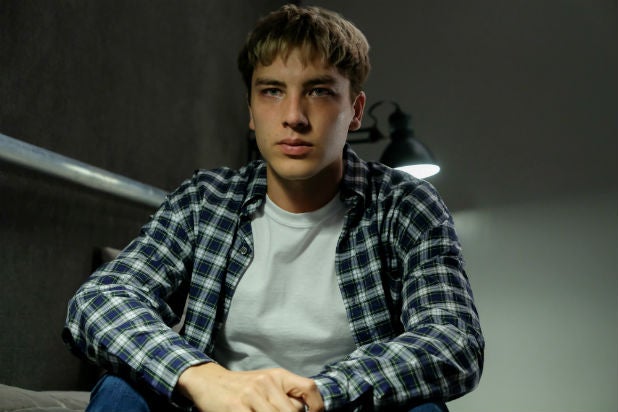 Are you ready to be freaked out? Good. Because we finally know who is gonna play the grown-up version of Tate’s (Evan Peters) baby on “American Horror Story: Apocalypse.”

Ryan Murphy revealed Thursday via Twitter that “Assassination of Gianni Versace” breakout star Cody Fern will be taking on the role of Michael Langdon a.k.a. the Antichrist.

“Excited to announce Cody Fern will be playing the role of Michael Langdon in American Horror Story: Apocalypse,” the FX horror anthology series’ creator wrote. Accompanying the announcement was a side-by-side shot of the young Michael from “Murder House” and Fern, in character for “Versace.” And, yeah, the similar plaid shirts and creepy facial expressions show the casting decision was spot on.

Just in case you haven’t realized why Michael is going to be such a pivotal role for the upcoming eighth season, let’s remind you “Apocalypse” is the “Murder House”-“Coven” crossover fans have been clamoring for for years. And in “Murder House” aka “American Horror Story” Season 1, Michael was the baby Vivien (Connie Britton) gave birth to after being raped by Tate.

Last month, Murphy took to Twitter to reveal the eagerly-anticipated crossover installment will arrive on FX this September. The news came as a shock to fans, as the series’ creator previously said the mashup was slated for Season 9.

Oh, and if the casting of a grown-up Michael isn’t a sign that Lange may actually return to the franchise, we don’t know what is.

Excited to announce Cody Fern will be playing the role of Michael Langdon in American Horror Story: Apocalypse. Premieres September 12 on FX. pic.twitter.com/kFYQ2GAncd