(Warning: This post contains spoilers for the season finale of “American Horror Story: Double Feature,” which was the conclusion of Part 2, “Death Valley.”)

“American Horror Story: Double Feature” ended its 10-episode season Wednesday with the birth of “another perfect specimen,” aka an alien-human hybrid that marks the beginning of a species intended to take over Earth and end mankind. Those little babies will be raised by Calico (Leslie Grossman), a woman who has been trapped in Area 51 giving birth to numerous infants that were deemed unworthy of living and considered failures in the aliens’ U.S. government-approved endeavor to create the ultimate mix of their kind and ours.

The “AHS: Double Feature” finale, which also served as the finale of Part 2, “Death Valley,” closed with Calico accepting her responsibility, despite the fact it will lead to the extinction of man. Grossman explained the reason behind her character’s decision to TheWrap.

“Well, I think that Calico’s main drive was to be a mother,” Grossman said. “I think she endured tremendous loss, year after year after year after year, several times a year. And I think that ultimately, her drive and desire and dream to be a mother overrode everything else. So I think she was focused on being able to take care of these little lives, even if they are terrifying, half-alien, end-of-the-human-race lives, this is something that she felt a calling toward and had waited so many years for and wasn’t going to give up her chance.” 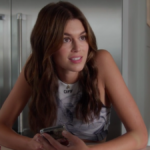 It also helped that the final iteration of the alien-human hybrid babies — which were birthed by the now-murdered, but still being used as a pregnancy “machine” Kendall (Kaia Gerber) — were pretty darn cute.

“So cute! They’re so cute. ‘American Horror Story’ has the best effects team ever, ever, ever,” Grossman said. “They do the most amazing job. That thing was so huge, you have no idea. With its big, crazy alien eyes, it was adorable. It was adorable.”

She added: “It’s the big eyes. It makes you love it no matter what. So they did such a good job. And when those little alien babies were on set, everybody took pictures with it and were like, ‘I love it! It’s so cute.'”

As far as what happens to Calico after “Double Feature” ends, Grossman said things are looking up for the woman who has been trapped in Area 51 for years without a purpose: “Honestly, she’s surrounded by 30 alien babies right now. All her babies. I’m sure she’s thrilled and so happy.”

Grossman was one of the “AHS” actors who appeared in both parts of “Double Feature,” playing cutthroat manager Ursula in Part 1, “Red Tide,” alongside Angelica Ross, who played the black pill creator, The Chemist, in the first half of the season, and alien-hybrid and scientist Theta in “Death Valley.”

Because the “AHS” universe is interconnected at times, and in unusual ways, we asked Grossman which of her “Double Feature” characters, Calico or Ursula, would win in a physical fight — with Calico working for the alien-hybrid cause trying to end the human race, and Ursula wanting to keep her kind alive in order to build her black pill empire in Hollywood.

“Oh my God, that is an incredible question,” Grossman said. “Like, in a face-off between Ursula and Calico, who would win? Oh my God. Wait, this is hilarious. Here’s what makes me sad: I want Calico to win, because she’s so sweet and lovely, but I just think that Ursula doesn’t play fair, and she’d probably win because there’s no bottom there. I think that Calico would be like, ‘What! You did that?’ Unfortunately I do think Ursula would win. Or, how about fortunately? Because you know what, Ursula, in her own way, is a queen. She’s not going to let anyone stop her from doing what she wants. So let’s not put her down. Would it have been better if she used her powers for good? Absolutely. But she didn’t. And let’s encourage a strong woman to win what she needs to do to get it done.”