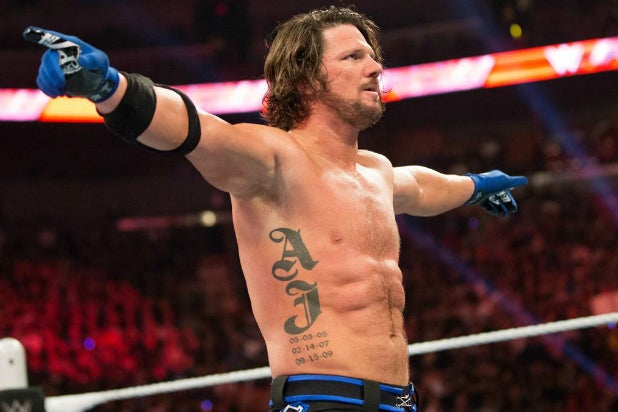 AJ Styles has signed a new WWE contract, he tweeted on Monday. Oh, and he got a new puppy to boot. (Not literally to boot, of course, that would be cruel.)

“This is the newest member of my family,” Styles posted on Twitter. “Also, I’ve signed a new contract with the WWE. What a cute little guy.”

This is the newest member of my family. Also, I’ve signed a new contract with the WWE. What a cute little guy. pic.twitter.com/PNqh9shgTH

Talk about burying the lede.

Puppy is presumably not part of the pro-wrestling deal. But look at that face!

Styles, real name Allen Neal Jones, is set to face Randy Orton on April 7 at New York/New Jersey’s WrestleMania 35. The 41-year-old Styles, who has long been considered one of professional wrestling’s best to ever lace up a pair of boots, only joined WWE in 2016.

In November, Styles lost his WWE Championship to Daniel Bryan. Before that night, Styles had held the belt for 371 days — that’s the longest anyone on “SmackDown” has ever been WWE Champion. The previous record-holder was John Bradshaw Layfield, who made a big belt buckle out of the company’s iconic belt for 280-straight days.