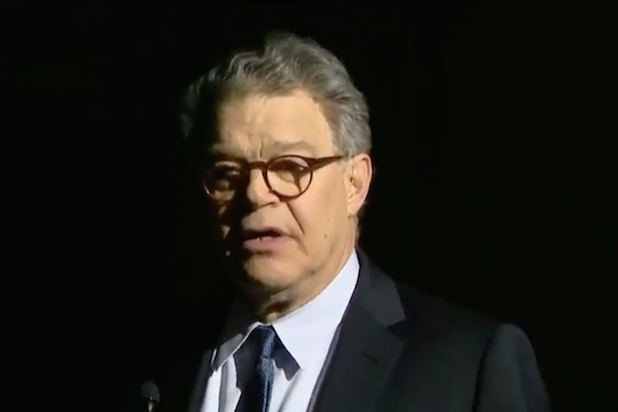 Al Franken (D – Minnesota) announced Thursday that he will resign from the U.S. Senate after facing over a half-dozen allegations of sexual misconduct. The move comes a day after he was denounced by more than a dozen of his Democratic Senate colleagues — including most of the Senate’s Democratic women.

“I am announcing that in the coming weeks I will be resigning as a member of the United States Senate,” said Franken, adding that an internal Senate investigation would make him unable to properly serve his constituents. “It’s become clear that I cannot both pursue the ethics committee process and remain an effective member.”

The former “Saturday Night Live” star, who was first elected to the Senate in 2008, also took a parting swipe at Republican leaders like President Donald Trump and Alabama senate candidate Roy Moore who have survived arguably more serious accusations of sexual misconduct.

“I of all people am aware that there is some irony in the fact that I am leaving while a man who has bragged on tape of his history of sexual assault sits in the Oval Office and a man who has repeatedly preyed on young girls is campaigning for the Senate with the full support of his party.”

While it once seemed the Minnesota senator might survive accusations of groping and forced kissing from multiple women, that illusions was shattered after Politico published a new accusation by a seventh accuser, a former Democratic congressional aide who said Franken tried to forcibly kiss her back in 2006 after a taping of his radio show.

Within hours, six female Democratic senators held a press conference denouncing Franken and calling on him to step aside.

By day’s end, they were joined by the majority of the Democratic caucus including Minority Leader Chuck Schumer. TheWrap reported yesterday that Franken was weighing his options Wednesday night with his family.

When Franken steps aside, Minnesota Gov. Mark Dayton, a Democrat, is expected to name a replacement to fill the seat until a special election in 2018. Whoever wins that contest would then have to seek re-election again when Franken’s current term ends in 2020.

“I do not feel that he should continue to serve,” said Sen. Kirsten Gillibrand (D – New York). “Everyone will make their own judgment.”

Franken woes first began last month when radio host Leeann Tweeden wrote that the comedian groped and forcibly kissed her while the two were on tour with the USO in 2003.