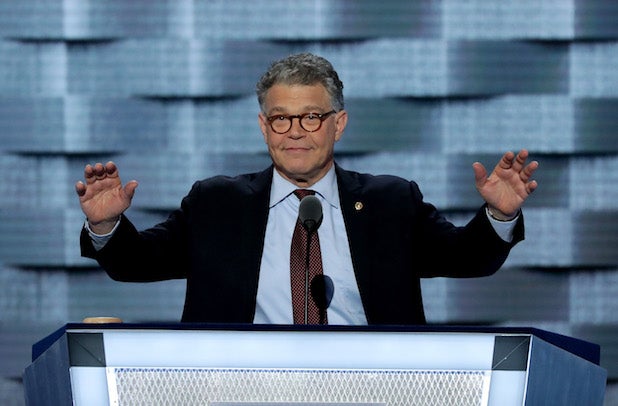 Amidst the outrage Kathy Griffin has received over her photo featuring a decapitated head of Donald Trump, it appears at least one person has forgiven her.

In a town hall discussion on Sirius XM Wednesday, Sen. Al Franken, a Minnesota Democrat, said that not only did the comic ask for forgiveness, she begged for it.

“And I believe in forgiveness,” he said in the clip below.

Franken also said on CNN’s “New Day” that he will still appear with Griffin in July at an event meant to promote his new book, “Al Franken, Giant of the Senate.”

Minnesota GOP Chairman Jennifer Carnahan called out Franken and Griffin on Tuesday, asking the senator to cancel the Beverly Hills event on Facebook.

Franken said he “condemned” the photo and called Griffin to tell her why the photo was “unacceptable.”

Griffin has been dropped from CNN’s New Year’s celebration, which she previously hosted with Anderson Cooper. “CNN has terminated our agreement with Kathy Griffin to appear on our New Year’s program,” a network spokesperson told TheWrap in a statement.

“I crossed the line,” Griffin said in a video post via Twitter on Tuesday. “I went way too far. The image is too disturbing, I understand how it offends people. It wasn’t funny. I get it. I’ve made a lot of mistakes in my career, I will continue. I ask for your forgiveness. Taking down the image.

“I’m going to ask the photographer to take down the image. And I beg for your forgiveness. I went too far. I made a mistake and I was wrong,” she continued.

President Trump has condemned the image as “sick.”