"You’re here to meet those two cute boys?" a hostess asked as she led the way to a booth where Jason Silva and Max Lugavere were seated.

Silva and Lugavere, both 27, chose to have lunch last week at a modish Hollywood restaurant across the street from Current TV’s studio, where the pair film their late-night flagship cable show, "Max & Jason: Still Up."

Since February, the pair have hosted the nightly hour filled with short-form documentaries from around the world. Segments range from subjects on the impact of technology on culture to the debate over medical marijuana. The latter is a topic which they’ll expand upon as upcoming guest correspondents for the "Dr. Phil" show.

In an episode that first aired this week and will repeat throughout the weekend, the duo talk to Oscar-winning screenwriter Bobby Moresco and actor Peter Bogdanovich about "How to Make It in the Industry."

It’s a subject both Silva, who hails from Venezuela, and New York City-raised Lugavere knew little about when they began their self-proclaimed "bromance" as film majors at the University of Miami. In one class, Lugavere was sitting next to a cute girl and Silva wanted to meet her — so he befriended Lugavere as a ruse.

But as they neared the end of their senior year and were on the cusp of graduation, they had no job prospects in sight. So when they heard Al Gore was launching a new TV network and was seeking young, passionate storytellers, they sent in a short film they’d been working on together called "Textures of Selfhood."

The project explored how they reconciled their lives as thinkers in South Beach, "which is like, the hedonistic sandbox for anybody who is out to have a good time," Lugavere said. "We wanted to show that you can have a religious experience with a person you like in your arms and the right song playing and all of your best friends around you."

"Wine and sex," Silva added, grinning. He waved over the waitress and proceeded to order the same entree as Lugavere — a brown rice bowl with fresh vegetables and chicken.

"We’re really big health fanatics. When you go to a restaurant and it’s all white bread and pasta, we’re not into that," Lugavere said.

"Yeah, we go to an Indian restaurant and stop at Whole Foods first so we can bring our own brown rice," Silva said.

"I can only date a girl who has a positive attitude towards her health. She has to be into the whole brown rice thing," Lugavere shrugs. "I’m completely obsessed. We both wanna live forever."

It may have been that attitude that Current executives picked up on after viewing the pair’s short film. Quickly after they sent the video in, the guys were on a plane to the network’s headquarters in San Francisco and being handed gigs as the network’s anchor personalities.

Now, they continually try to strengthen their own brand as personalities via social marketing like Twitter and Facebook. In a sense, they said, they’ve become their own publicists. 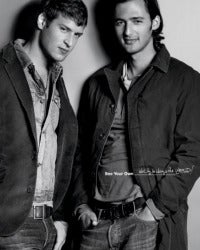 They can quickly rattle off the list of publications that have written about them — Interview, Nylon, Loma Vogue — and proudly remember what they’ve been deemed: "Al Gore’s boys," and "the next wave or journalism — a hybrid between a TV personality and a thinker."

They know how many homes Current reaches — 60 million — and say it’s mostly watched by "influencers and tastemakers, people who have a broader influence on the world we live in."

Certainly the recent North Korean kidnapping and release of Current journalists Laura Ling and Euna Lee brought attention to the network, though Silva and Lugavere said they wouldn’t comment on the news.

"It’s not our place. Our show stands alone," Lugavere said. "They’re good friends of ours and they’re good colleagues and we were heartbroken when the whole thing happened, but we were so relieved when people came back and were okay."

The two look at each other and nod in agreement. Ostensibly, there’s nothing they disagree upon. They promise that they really do get along all the time, despite the fact that their friendship has turned into "its own enterprise."

They were featured in a Gap print ad campaign (see above) last fall together, share an apartment on Fairfax Avenue, eat at the same restaurants and go out to the same bars — recently, they’ve been frequenting Bardot and the Roger Room.

"Still, you probably won’t see us on TMZ just because we’re, like, these young TV hosts on a hip network," said Silva. "I mean, have you been out in Hollywood? People are like, ‘OMG, I’m in TMZ, I’m in Perez [Hilton]! People like that."

"That’s not a goal for us, though it’s a goal for a lot of people in this town," Lugavere added. "What we want to do is talk to influential people about the conversations of our time. And my mom has finally stopped pressuring me to be a doctor or a lawyer, so that’s gotta mean something."