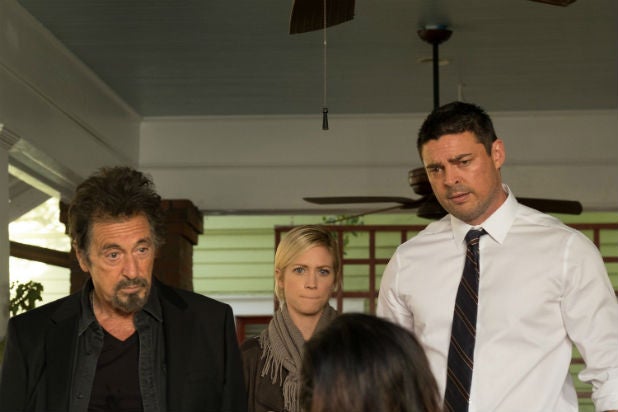 He may have multiple Oscars, Emmys, Golden Globes and even two Tony Awards, but Al Pacino’s newest movie, “The Hangman,” has received the rare 0 percent critics rating on Rotten Tomatoes, TheWrap has learned.

Pacino’s latest bomb joins Adam Sandler’s “The Ridiculous 6” in the zero percent club along with Elle Fanning’s “The Nutcracker in 3D,” and the “Saturday Night Fever” sequel “Staying Alive.”

“The Hangman” centers on decorated homicide detective Ray Archer (Pacino) who partners with criminal profiler Will Ruiney (Karl Urban) to catch one of the city’s notoriously vicious serial killers, who is playing a twisted version of murder using the child’s game … Hangman, while journalist Christi Davies (Brittany Snow) reports on the crime spree, shadowing the detectives.

Just how bad is “The Hangman?” Film Journal International’s Maitland McDonagh called the film “A slog of a movie, an instantly forgettable rehash of genre rehashes that isn’t even engaging on a ‘Who done it?’ level.”

Johnny Martin directed “The Hangman,” which was written by Michael Caissie & Charles Hutting, and Phil Hawkins.

The film will open in theaters and On Demand Dec. 22.