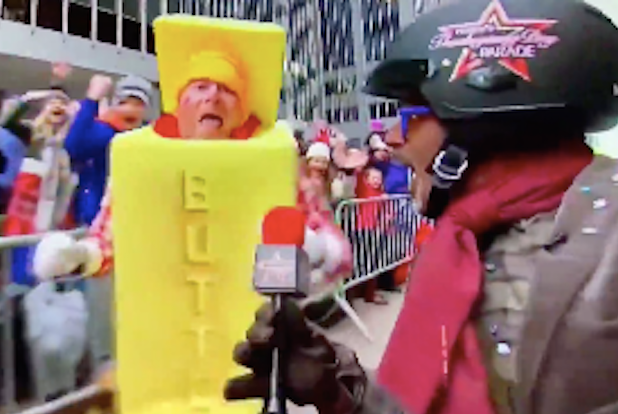 The Roker household is officially a margarine-only home now, probably, judging by how Al Roker spent his Thanksgiving morning fighting off a man-sized stick of butter at the Macy’s Day Parade on Thursday.

The “feud” started with Roker approaching the man — dressed from head-to-toe as a stick of butter, complete with the word “butter” spelled out vertically across his body — and imploring him to get out of his shot. It seemed jovial enough.

“I hate to butter you up, but you’ve got to move on, okay? There you go,” Roker said, before playfully shoving the butter guy aside.

“Get out of here ya butter,” he said during another dust up. “I can’t believe it’s not butter!”

Roker’s holiday spirit seemed to dissipate a little later, though, as the butter guy once again ran into his shot as he was darting past parade goers. “Butter you turkeys, butter your hams!” the butter guy appeared to yell towards the camera.

A miffed Roker turned and dryly added: “and that’s why everybody loves clowns. Yeah.”

You can check out a quick compilation of Roker Vs. Butter below:

Happy Thanksgiving from Al Roker and this stick of butter. #MacysParade pic.twitter.com/QaAboXpV6b

Roker did a shove to a butter pic.twitter.com/O39z1ofAap

In related news, this was Roker’s 25th time covering the Macy’s Thanksgiving Day Parade. Congratulations on your silver anniversary, Al.

Turkey Day is here, which means that all across America, La-Z-Boys have been dragged in front of TVs because the annual viewing of the Macy's Thanksgiving Day Parade is upon us. One way to get hyped for this year's festivities is to remember some of the most epic fails of years past. From the infamous Uncle Sam and Spider-Man incident of 2012 to the numerous bystanders injured when balloons collided with street lamps, here are some of the most unforgettable -- and uncomfortable -- moments in the parade's history.