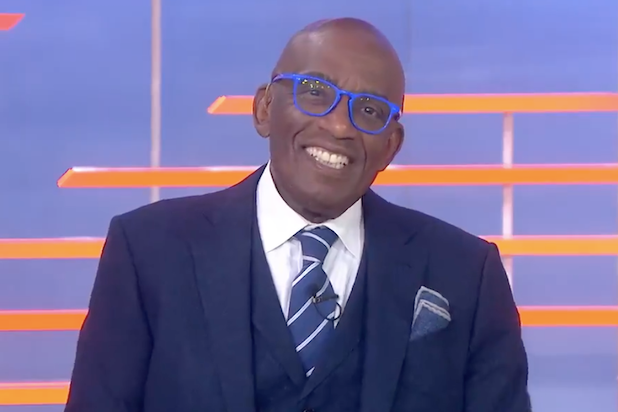 Al Roker returned to NBC’s “Today” show Monday following two weeks away to undergo and recover from prostate cancer surgery. And when America’s favorite weatherman returned to Studio 1A, he did so with a smile on his face and a hilarious joke for his coworkers and fans at home.

“I feel good, I really do,” Roker told his “Today” colleagues Savannah Guthrie, Hoda Kotb, Carson Daly and Craig Melvin. “Let me tell you– look, after the first week you can get that catheter out. Suddenly, I’m feeling good. I feel good, been trying to exercise and now I’ve got something I share with [my wife Deborah Roberts] and all of you ladies who have children: I’m kegeling right now.

Apparently, Daly has no idea what “kegeling” is and the other “Today” co-hosts were not about to tell him.

Roker thanked everyone for all their warm wishes, and said he’s gotten a “lot of love” from his family and “all of you here [at the ‘Today’ show]  just really took care of me.”

“The first week of January, I’ll go have blood work and hopefully my PSA has dropped considerably and for the next five years I’ll get tested every six months,” Roker said.

Last Tuesday, Roker gave Guthrie and Kotb an on-air update from home, saying he expected to return to the “Today” show this Monday, following his surgery for prostate cancer the prior week, and would also be handling his usual duties at the Macy’s Thanksgiving Day Parade.

Al’s physician, Dr. Vincent Laudone of Memorial Sloan Kettering Cancer Center, appeared during that interview to say, based on lab results, it appears Roker’s cancer was isolated to his prostate and removed, giving him “an excellent prognosis.”

Roker announced his cancer diagnosis on air on Nov. 6. Given the aggressive nature of his cancer, he announced he would be taking time off immediately and hoped to be back in two weeks.

“One in nine men are going to be diagnosed with prostate cancer in their lifetime,” he told his colleagues and viewers at the time. “But for African-American men, that number is one in seven and is more deadly. If you detect it early, it is a very treatable disease.”

See Roker’s first appearance back at the “Today” show below.

"I feel good, I really do," says @AlRoker. We're checking-in with our good friend Al who is back in studio 1A after receiving surgery for prostate cancer just two weeks ago. pic.twitter.com/ZHdjJqyfDY