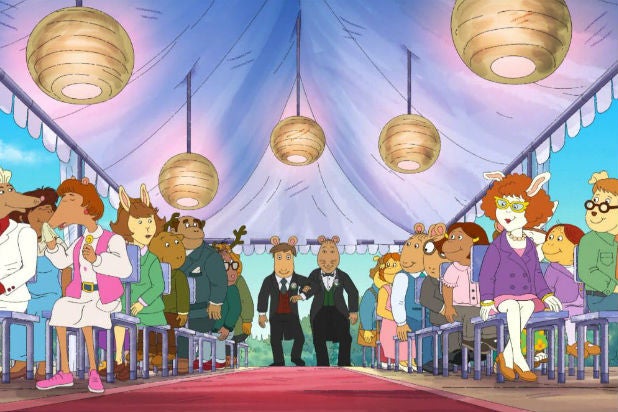 Alabama public television is refusing to air the Season 22 premiere of animated series “Arthur” over concerns about the gay wedding of teacher Mr. Ratburn.

In a call with TheWrap, APT director of programming Mike McKenzie said that footage of same-sex relationships would have raised serious objections among many viewers.

“Our concern is with the subject matter, the marriage of Mr Ratburn and the other gentleman,” McKenzie said. “We have a fairly large number of people who have a problem with teaching that to their children.”

“Many parents feel that Mr. Ratburn’s marriage conveys a positive message that they think is appropriate for their children. Many other parents disagree, either because their children are too young, or because of their beliefs,” he continued in an emailed statement.

“The vast majority of parents will not have heard about the content, whether they agree with it or not, and our greatest concern was taking away these parents’ choice. Parents who want to are able to watch the episode online with their children at pbs.org. Our broadcast would take away the choice of parents who feel it is inappropriate.”

“Arthur,” which first aired in 1996, raised eyebrows this year after their decision to feature the show’s disciplinarian teacher Mr. Ratburn in a marriage to a male aardvark. The show makes no mention of the word gay or the character’s genders and the students offer no visible reaction to it.

The episode primarily focuses on a hunt to find out who Mr. Ratburn will tie the knot with and the disbelief of students to accept that teachers can have private lives outside of school.

The move by APT was denounced by GLAAD on Tuesday, which called the decision “mean-spirited.”

“With LGBTQ visibility at an all-time high on television, including in the Kids and Family Programming genre, this attack to censor content is not only mean-spirited, it’s a losing battle,” said President and CEO Sarah Kate Ellis. “TV worlds often reflect our actual world and today that includes LGBTQ parents and families. LGBTQ parents and their children deserve to see themselves reflected in media and if leadership of this public broadcasting station cannot serve the interests of the entire public, it’s time to find someone who can.”