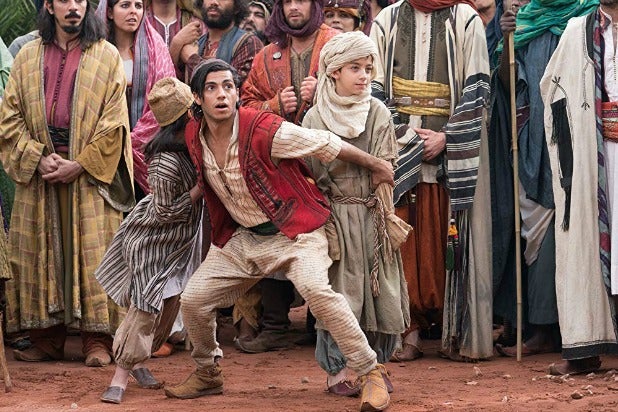 Disney’s remake of “Aladdin” is off to a magical start, earning $31.5 million from 4,476 screens at the box office on Friday. While trackers expected a 4-day Memorial Day weekend opening of $75-85 million, “Aladdin” is now on pace to blow that out of the water with estimates now reaching $109-111 million, higher than the $103 million 4-day start earned last year for “Solo: A Star Wars Story.”

Granted, at this point in the weekend, there’s a lot of room for “Aladdin” to either push estimates even higher or to see a big day-to-day drop. The latter was the case for “Solo,” which saw its opening estimates plummet as the weekend went on until it needed the Monday holiday to get an opening above $100 million. With plenty of other leisure options besides movie theaters available this holiday weekend, swings in fortune aren’t out of the question.

But the good news is that “Aladdin” has word of mouth on its side. While critics have been tepid about the remake with a 58% Rotten Tomatoes score, Disney fans nostalgic over the Genie and “A Whole New World” were very much pleased with a Postrak score of 4.5/5 and an A on CinemaScore, the latter matching the audience grade given to the 2017 remake for “Beauty and the Beast.” The groundwork is set for the strong word of mouth that could keep moviegoers turning out throughout the weekend.

In the number two spot is Lionsgate’s “John Wick: Chapter 3 – Parabellum,” which earned $6.6 million on its second Friday and is on course for a solid second weekend with a $30 million 4-day total. That would give “Wick” a two-weekend total of $106 million, making it the first Lionsgate film in 18 months to gross more than $100 million domestically.

“Avengers: Endgame” will take third with an estimated $22 million in its fifth weekend, pushing its domestic total past $800 million. WB/Legendary’s “Detective Pikachu” will take fourth with $17 million, pushing its total to $120 million after three weekends.

Completing the top five is Sony/Screen Gems’ anti-Superman horror film “Brightburn,” which earned $3 million on Friday from 2,607 screens, putting it on pace to meet studio projections of a $10 million 4-day opening. Reception has been lukewarm at best for the film, with a 57% Rotten Tomatoes score and a B+ on CinemaScore. Still, with a $6 million budget, the bar to reach profitability has been set characteristically low by Sony.

Just below “Brightburn” is the third new release of the weekend, Annapurna/United Artists’ “Booksmart.” After making $2.4 million from 2,505 screens on Friday, Olivia Wilde’s directorial debut is estimated to hit the lower end of projections with an $8 million 4-day start. The film has received critical acclaim with a 99% Rotten Tomatoes score, while audiences have given it a B+ on CinemaScore. “Booksmart” started trending late Friday night with early moviegoers praising its LGBT themes and predicting that it would soon become a cult coming-of-age classic.